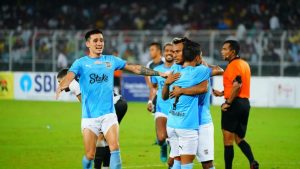 Mumbai City FC secured their place in the 2022 Durand Cup final after defeating Mohammedan Sporting Club 1-0 in a gripping semifinal. The decisive goal was scored by Bipin Singh in the dying embers of the game to help the Islanders reach the Final of the 131st Durand Cup, where they will face either Bengaluru FC or Hyderabad FC for the coveted trophy.