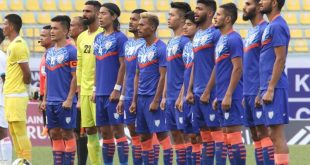 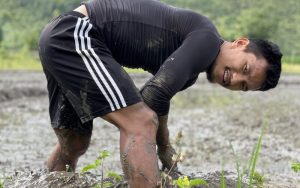 Far away from the big cities and the fancy hotels that top footballers in India are now used to, Blue Tigers winger Len Doungel has been toiling away in a field that is much different to the one that he is used to.

In his native M. Bunglung village, the 27-year-old joins the rest of his family out in farming on their paddy fields.

“This is the farming season – June, July and August – on our paddy fields in Manipur. My dad has always been a farmer, and I remember he used to cultivate the fields from when I was a little kid,” Len said.

While Len spends most of the year with his team during the season, the onset of the off-season means more family and farm time for the footballer.

“When I come back to my village, it’s all about helping my parents with different things. There are no five-star hotels here. We all stay together in our house and help each other in everything, and that also means helping out on the paddy fields,” said Len. “Just because I am a professional footballer in the Hero ISL, doesn’t mean that I can’t get my hands into the mud.”

He averred, “There is a lot of knowledge that is required for farming, and that is something that I have learnt since I was a child. This is not knowledge that we should throw away. There’s an entire process for planting paddy – how to get the water supply from the rivers, the need to cut off the grass at the correct moment. If your land has grass, it won’t let the paddy plants grow. There is a whole set of complicated processes that are involved, and I love helping out my family with it whenever I can.”

Being the eldest child out of nine siblings, Len had found himself lending a hand to his father from the age of seven. “Back then we used to till the land with the help of an ox. Nowadays, there are other ways of doing that,” he informed.

Recalling the struggle in his younger days, Len remembered that his younger version used to somehow find the time to squeeze in lessons at school, a bit of farming, and even have time to train with the football at his feet.

“It was difficult for us during those days. We never really thought that we could reach this level of football. I used to help my father out on the field early in the morning, then go to school during the day, and then whatever free time we had, we used to play football,” he smiled. “We couldn’t afford a normal football, so I used to have a little plastic ball and used to carry it around everywhere I went.”

Having started out on his professional career 10 years back, Len has come through the Indian Arrows setup, a developmental side started by the AIFF that aims to promote young talented Indian footballers through the Hero I-League.

Since then, the winger has played for a number of top clubs across the country and has also played International Football, scoring his maiden goal in the India colours against Afghanistan in Dushanbe, in 2019.

His journey in the beautiful game has also allowed him to help his family out in terms of financial matters. “We could not afford school fees or books when I was young. But, I am happy that since I have started earning through football, things have gotten better. I have managed to get a new house for my parents and my siblings. I am the eldest and have to take the responsibility,” stated Len, who is now supporting his siblings, some of whom are pursuing their careers as footballers in different academies, while others are studying.

🗣️ @Seiminlen_9: "Just because I am a footballer, doesn’t mean that I can’t get my hands into the mud. I love helping out my family on the farm.” 👏

Here's how the #BlueTigers winger has been assisting his family during the off season! 🌾🙌#BackTheBlue 💙 #IndianFootball ⚽ pic.twitter.com/UjinHrcr9D