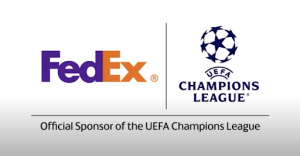 In 2019, FedEx also signed a four-year deal to sponsor UEFA National Team football. That includes rights to UEFA EURO 2020 this summer – which kicks off in Rome on June 11, culminating in the final in London on July 11 – and the UEFA Nations League finals.

“FedEx has proved to be an incredibly valued UEFA partner. We are delighted they are continuing their evolution with us, which started in 2015 and now sees them supporting our flagship club competition – the UEFA Champions League,” said UEFA marketing director Guy-Laurent Epstein.

“The UEFA Champions League is the world’s greatest club competition, and we are looking forward to working with FedEx closely over the next three years to help them activate their numerous projects. They will benefit not just the footballing community, but also look to have a positive impact on the environment.”

The UEFA Champions League will provide FedEx with an excellent opportunity to connect with new and existing football fans to promote their brand. The 2019/20 competition was broadcast in more than 200 countries and territories worldwide, reaching a cumulative audience of 2.4 billion across all programming and generating a total of 25.6 billion cumulative social interactions.

Over 170 million followers on social networks make the UEFA Champions League the most followed sports property in the world.

Under this new partnership FedEx will work closely with European football’s governing body to make UEFA’s sponsorship activations more sustainable, which is in line with FedEx’s own commitment to be carbon neutral by 2040.

“Our global sponsorship of UEFA Champions League will deliver unrivalled opportunities for our brand, team members, customers, and communities. Aligning our brand with world class sports performance allows us to connect our services to our audiences through the passion and emotions generated by sports and enables us to contribute positively to our local communities,” said Brie Carere, executive vice president, chief marketing and communications officer, FedEx Corp.

“We’ll continue to explore powerful social responsibility collaborations with the UEFA Foundation for Children, as we have done throughout our UEFA Europa League sponsorship”.

Since becoming a UEFA partner in 2015, FedEx became the first partner to collaborate with the UEFA Foundation for Children to create impactful programmes that deliver access and opportunities to young people through football. Pitches have been built in Spain, Poland, Brazil, and South Africa, giving youngsters in the local communities the opportunity to play in a safe and secure environment.

FedEx and the UEFA Foundation have also co-founded a Football for Employment programme, which uses football as a tool to bring young adults who are not enrolled in education, employment, or training initiatives, closer to the job market, while they also invited local children to be player mascots at UEFA Europa League finals, in collaboration with non-profits in Stockholm (Sweden), Lyon (France) and Baku (Azerbaijan), which featured an all-girl player mascot line-up.