The Deutsche Fußball Liga (DFL) is the big winner of the 2020 WFS Industry Awards, presented annually by World Football Summit to acknowledge and reward the achievements of executives, managers, sponsors, agencies, media, NGOs and other professionals whose talent, passion and dedication help make football the world’s most popular sport.

As CEO of the DFL, Seifert led the Bundesliga’s successful restart, becoming the first elite football competition to return after the Covid-19 lockdown, setting the standards for many others to follow.

Spain’s LaLiga was also successful at this year’s awards, with Real Club Celta taking home the prize for the Best Internationalisation Strategy presented by Deloitte and Santander, the league’s main sponsor, being crowned the inaugural winner of the debuting Outstanding Innovation Initiative presented by N3XT Sports category.

The Spanish club, who saw off Mediapro Canada and Asia Pacific Events in the final three, achieved a significant growth in key markets over the past twelve months; boosting its fanbase in strategic areas such as Asia, South America or the United States.

Santander, the bank of world football, was awarded for ‘Fieeld’, an initiative developed together with its partners LaLiga, CONMEBOL and UEFA to bring blind people closer to the full experience of watching a football match.

Visa, who has marked its largest investment to date within the women’s game through continued support of the FIFA Women’s World Cup and a multi-year partnership with UEFA, claimed the award for Best Women’s Football Initiative presented by Women in Football, whilst Horizm – a world leading digital asset pricing platform for sports and entertainment – clinched Best Supplier presented by SportsTechX.

The WFS StartCup by GSIC was won by Inmersiv.io, a French startup aiming to reinvent fan engagement in sport through augmented reality.

Awards will be handed virtually as part of WFS LIVE, the digital event that will bring the global football community together from November 23-27 to build the industry’s roadmap towards a brighter and more sustainable future for all stakeholders. The closing day will be devoted to honouring the winners, who will take the virtual stage for a 20-minute interview that will be streamed on the WFS LIVE platform. 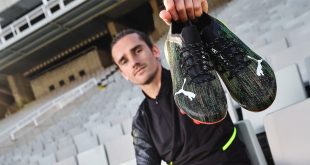 Sports company PUMA has launched the GAME. ON. edition of the uncatchable ULTRA 1.2 football …