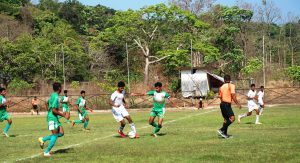 A spirited Snows Football Academy were sidelined by the Salgaocar FC in the GFA Under-16 League – South Zone semifinals fixture played at the Curtorim grounds. Sydron Baptista scored early for the Greens via a free-kick while Max Colaco brought parity in the 14th minute; Antonio D’Silva and Riston Colaco netted a goal each for the Greens as the Vasco side won 3-1.

The first half began with a display of attacking football from the Vasco side as they began to mount the pressure early on in the game. In the 4th minute Levy Pereira was able to find a gap in the Snows Football Academy defence and crossed the ball to an onrushing Chaitan Komarpant who failed to capitalise. Sydron drew first blood in the very 10th minute as he sent a well-placed free-kick after the Raia’s defence were fouled for handling the ball.

The Snows Football Academy lads were quick to respond as they received a free-kick on the other end in less than five minutes. Roland Vaz sent a curling ball which hit the upright post and bounced into the path of Max who calmly placed it beyond the goalkeeper’s reach restoring parity. The Greens remaining confident fought valiantly until the lemon break to get ahead, but it stayed at one-all.

When play was resumed it was the Salgaocar Junior side that maintained the pressure on the Snows Football Academy and were able to break the deadlock in the 78th minute via Antonio whose belter bounced off the post onto custodian Floyd Pereira’s back and into the goal. Just two minutes later Antonio then turned provider for the final goal of the evening as Liston obliged. With this the Greens enter the finals of the GFA U16 League – South Zone.