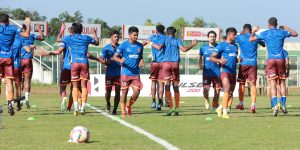 Defending champions of a league changing their coach midway through the season means only one thing – the campaign is falling short of expectations. That has been the case with Gokulam Kerala in the ongoing edition of the I-League. However, they were able to start the New Year under new coach Francesc Bonet with a 1-0 win against Churchill Brothers.

It was a hard-fought match and a narrow win with Spanish forward Sergio Mendigutxia scoring the all-important goal in the 80th minute. But it ensured Gokulam Kerala did not fall too far behind in the title race. On the eve of the match, Bonet said “The victory against Churchill Brothers gave us a lot of confidence. Having a new coach is not easy for players, and after that win, I think the team now has belief in the new style of play and what we want to achieve.”

As they play their last match of the first leg against Tiddim Road Athletic Union (TRAU) at Payyanad Stadium here on Sunday, the Kerala side is in the fourth spot in the standings. They can overtake Real Kashmir with a win on the morrow and take the third position.

This encounter can be called a contest between I-League’s best defence and the second-best forward line. TRAU have scored 16 goals so far, best being Sreenidi Deccan FC’s 19, while Gokulam Kerala have conceded least (3). TRAU’s undoing has been their away form. They are the only team to have won all their home games, but none away. That record would give Gokulam Kerala hope but their defence, which will be missing this season’s staunchest defender Bouba Aminou because of suspension, will have to watch out for the attacking prowess of Komron Tursunov (5 goals) and Nana Poku. TRAU’s new signing, Brazilian attacking midfielder Fernandinho, may also come on as a substitute.

Bonet singled out Tursunov for praise. “TRAU have very good players. I know about Komron’s abilities particularly because we were together for a short period of time in Rajasthan United.” However, he sounded confident of being able to contain his former ward and his mates even without Aminou’s services. “Ours is a big squad and I see everyone putting in same amount of effort in training, so I’m not too worried.” 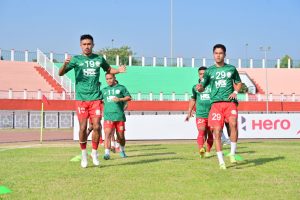 TRAU coach Leimapokpam Nandakumar Singh, on the other hand, would hope to continue the show his boys put up against Sudeva Delhi FC. High time they started winning away from Khuman Lampak Stadium in Manipur. Better performance in away matches now could push Nandakumar’s team to an unprecedented height.

He recognised that Sunday’s match will be a tough one. “Gokulam Kerala are a very difficult side but at this stage of the league, we have to get points, so we’ll try hard.” The long journey from Imphal to here means there is fatigue in the camp, but the coach hoped they would recover before the kick-off. He sounded more worried about the next match against NEROCA. “Soon after this match, without a night’s sleep, we’ll have to catch the flight back to return home and play NEROCA. That’s going to be difficult,” he remarked.