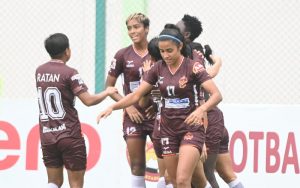 Gokulam Kerala FC came from behind in the Indian Women’s League to register a 2-1 victory against Indian Arrows at the Capital Ground in Bhubaneswar on Monday, May 9.

The AIFF’s developmental side took a surprise lead in the 6th minute of the game after Gokulam Kerala goalkeeper Aditi Chauhan’s pass was cut off in between by Naroem Priyangka Devi. The No. 10 spotted the goalkeeper away from the line and took her chance from long range to beat her.

The young side kept their lead for almost half an hour, before the defending champions hit back with an equaliser. Elshaddai Acheampong carried the ball towards the box and blasted a shot in the near post, past the Indian Arrows goalkeeper to make it 1-1 on the 36th minute.

The Ghanaian forward has been in red-hot form since the beginning of the IWL season. She went on to score another, inside the opening minutes of the second half. Manisha Kalyan chipped the ball into the near post and Elshaddai’s header left the Arrows goalkeeper unmoved as the scoreline depicted 2-1 in Gokulam Kerala’s favour, on the 47th minute.

Overall, Gokulam Kerala FC dominated the possession stats, but the Indian Arrows delivered a spirited performance nevertheless. The win takes the Malabarians back to the top of the IWL table while Arrows remain in the fifth position.