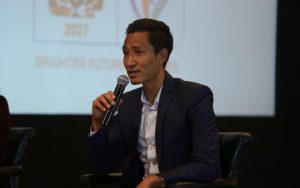 Former India defender Gouramangi Singh has backed India to rise to the occasion and deliver a world-class tournament, if they win the bid for the 2027 AFC Asian Cup.

Gouramangi, who was a key part of the squad that participated in 2011 AFC Asian Cup, felt that the tournament of such stature will excite both players and fans, and further increase the stature of the game.

“I still get goosebumps thinking about the 2011 edition. All the players want to play at the highest level and play in big tournaments, it doesn’t get much bigger than the AFC Asian Cup. They will be testing themselves against the best of Asia and it will certainly help in the overall growth of the player as well.”

Gouramangi further added that fans will also enjoy watching quality football, and it will certainly attract young kids to the game.

“To see top players competing in a serious competition will be exciting for the fans. For us as a country, a lot has changed in the last decade when it comes to football. Fans want to see the best players in action, competing at the highest level which is something AFC Asian Cup will do. When that happens, kids will automatically be encouraged to take up the game.”

Backing India to be successful for the bid, Gouramangi said India has a lot to offer both on and off the field, and said that hosting world-class tournaments will hold the country in good stead when the host is finally selected.

“We have already hosted the FIFA U-17 World Cup – which was a massive success and saw record-breaking numbers. Then we are also hosting the AFC Women’s Asian Cup and FIFA U-17 Women’s World Cup next year. This will be beneficial for sure. Our infrastructure can now compete with the best around the world.”

“I would also like to invite all the players, officials and fans travelling to explore India while enjoying the football. Seeing the diversity of our country, we have a lot to offer both on and off the field. I am sure everyone will have a great time in India!”

Previous VIDEO: SC East Bengal’s Robbie Fowler ahead of Chennaiyin FC clash!
Next VIDEO: Nepal skipper Kiran Limbu: Playing I-League is the next level for us!