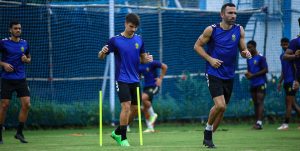 After a commanding performance that saw them finish atop of Group C in the Durand Cup, Hyderabad FC are all set to take on I-League side Rajasthan United FC, in a crunch Durand Cup Quarterfinal clash at the Kishore Bharati Krirangan in Kolkata on Monday.

Hyderabad FC registered three wins in the group stage and will look to make it to the semifinals of the prestigious competition for the first time in their history.

Head Coach Manolo Marquez believes that his side are determined to go the distance. “We are currently in pre-season and are getting ready for the Indian Super League. But we respect this competition and want to go all the way. So, we will want to be at our best in this game against a tough side in Rajasthan United,” said the Spaniard.

Rajasthan United, who pipped Kolkata giants ATK Mohun Bagan and East Bengal from their group, have been the surprise package in the Durand Cup this year.

The I-League side have lost just one game in the competition so far, scoring six goals with their most impressive result coming against the Mariners. Gyamar Nikum, who scored the stoppage-time winner in that game, is currently the top goal scorer for the side and could be the danger man for Hyderabad FC in this tie.

Rajasthan United FC have quality all across the squad and could prove hard to beat, believes Hyderabad FC Head Coach Manolo Marquez.

“Rajasthan United beat ATK Mohun Bagan in their stadium, which is surely not easy. They try to play good football with a good style. They have some really good players and I think that this will be a difficult game for our side,” added Manolo.

Hyderabad FC, on the other hand, are fresh from a loss to Army Red FT in their final group stage game, but finished top of the table with nine points on board.

In-form Bartholomew Ogbeche is currently the second highest goal-scorer in the Durand Cup this season, with four goals to his name but he has been equally assisted by the likes of Borja Herrera, Joel Chianese, Joao Victor and Halicharan Narzary, who have all been on the score-sheet in the group stage.

Hyderabad FC are one of the highest goal-scorers in the competition and will hope to be at its best in the knockout stages of the competition. The winner of this game is set to face Bengaluru FC, who beat Odisha in the second quarterfinal, at the Saltlake Stadium later this week.

The game kicks off at 6pm IST and will be telecasted live on Sports 18 and streamed on VOOT app.