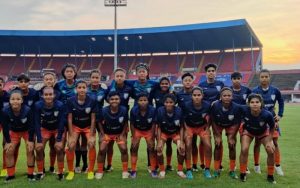 After camping in Jamshedpur, Jharkhand, the India U-17 Women’s National Team will travel to Italy and Norway, from June 20 till July 8, 2022 and participate in two tournaments as part of its preparation for the FIFA U-17 Women’s World Cup that is set to be held in India later this year.

The young tigresses will play two tournaments during their exposure tour – the 6th Torneo Female Football Tournament in Italy from June 22–26, 2022 and Open Nordic Tournament WU16 in Norway from July 1-7, 2022. This will be the first time, the team is participating in the NORDIC Tournament.

India will face Italy on June 22 at 10pm (IST) at the Gradisca d’lsonzo stadium in the 6th Torneo Female Football Tournament. Apart from India, Chile, Italy and Mexico will also be participating in the tournament.

On the other hand, in the Open Nordic Tournament WU16 in Norway, eight teams will compete against each other – Netherlands, India, Norway, Iceland, Denmark, Faroe Islands, Finland and Sweden. India will face The Netherlands on July 1, 2022, at the Strommen Arena from 6.30pm (IST).

Head Coach Thomas Dennerby who took charge of the team earlier this year has selected 23 players who will be playing the international games.

Further fixtures will be updated later.