Indian footballer Vedaant Nag speaks about himself & his career!

Arunava Chaudhuri 2021-07-18 Europe, General, Other Leagues Comments Off on Indian footballer Vedaant Nag speaks about himself & his career! 3,353 Views 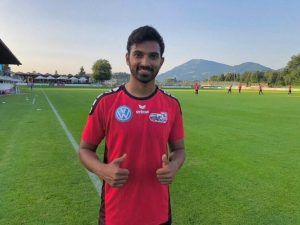 I caught-up with Vedaant to learn more about him, his football career and more…

I am a Navy child, brought up in New Delhi in a warm, loving, family who love food, music, and sports in that order! My schooling was at The Shri Ram School where I learnt to love learning, football, music and art.

I’ve grown up as an avid fan of Manchester United and Cristiano Ronaldo, who I have had the opportunity to meet.

How did your introduction to football open?

Like most younger brothers, my motivation was to emulate my older brother Siddhant who was a passionate and excellent player himself. I consider him my first inspiration. My grandfather, my dad and my uncles were all avid sportspersons in their time and I guess the genes travelled.

My mother, who was blessed with two sportsmen, drove us to endless early-morning school training sessions and tournaments. I experienced football at a grassroots level when I was selected for the Under-13 Haryana and U-17 Delhi team. It was my exposure to the Youth Friendship Games in Holland however that gave me an outlook on football that really appealed to me. It was also around this time that I met my mentor today, Eric Benny.

How did your European football journey begin?

Eric Sir’s cooperation with FC Metz gave me the opportunity to rub shoulders with top youth prospects in France. It was a massive eye-opener for me. After two valuable years, I then decided to come to DFI in Germany, which let me hone my skills individually while officially playing in the German men’s divisions. I came in with the thought process that I would start out with a lower division club like the 4th division and in 2-3 years play in the Bundesliga.

It was soon made clear to me however, that Men’s football in Germany was a whole different beast. Starting from the 10th of 12 divisions, I worked my way up the ladder to the 6th division before my jump to the 3rd division in Austria. It has been a very long and bumpy ride but one that’s possible nonetheless!

Why did you choose to take the European route?

Hearing stories of Sunil Chhetri playing for Kansas City Wizards a friendly against Manchester United and Bhaichung Bhutia playing in England made me wonder why it wasn’t possible for me to make my mark in Europe.

My ambition was to achieve something few Indians have, which is why this moment is a proud one personally and as an Indian. Watching my father directly contribute to the safety of our country inspired me to want to give back to India in whatever capacity I can. I intend to do the same in the future and put India on the football map.

What struggles have you faced?

Being away from home has to be the biggest sacrifice I have made. I have been in Europe for seven years now, meaning missing out on seven years worth of potential memories with my closest friends and family.

Finding a way to manage my academic pursuits while continuing to play, becoming fluent with foreign languages and finding the finances to support all this was a tough task.

Add the usual ups and downs of your individual performance and it can make for a very taxing time physically and emotionally.

How have your experiences in France and Germany been?

My experience has been very positive. I have found that people are appreciative of efforts to learn their language and integrate yourself in their culture. That is all that is expected, you will quickly be rewarded with respect. FC Metz and DFI opened their doors to me and treated me as their own for which I am thankful.

Thank you for the interview and all the best! 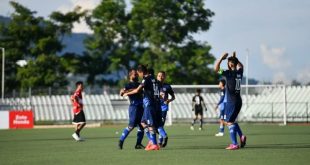