Is violence becoming the norm at the Kolkata Derby?

Arunava Chaudhuri 2019-06-24 I-League Comments Off on Is violence becoming the norm at the Kolkata Derby? 1,119 Views 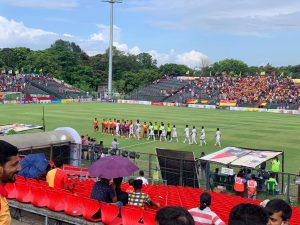 All was set on Sunday, June 23 afternoon for the final of the inaugural U-19 Zee Bangla Football League between the archrivals East Bengal Club and Mohun Bagan AC at the East Bengal ground.

I was looking forward to it to see some of the future of Indian football, but coming in I had a bad feeling when I saw the lack of security forces, meaning police within the enclosed ground.

And also I decided not to sit in the VVIP enclosure and rather sit in the East Bengal members gallery to get a real feel of mini derby.

The ingredients were there for a lovely afternoon of football.

But sitting there amongst the East Bengal fans I soon realised that some of them had only come to the ground to abuse Mohun Bagan and their own players for mistakes and vice-versa was happening at the Mohun Bagan end.

East Bengal took the lead through a genuine penalty in the first half after dominating most of the game, but then in the third quarter, the game was played across four quarters of 15 minutes each, the East Bengal keeper left his goal as things were being thrown at him from the Mohun Bagan fans behind him.

Soon after Mohun Bagan equalised and there were some unwanted gestures by the Mohun Bagan youngsters which agitated the crowd.

And then came the moment of madness by East Bengal keeper Ayon Roy, who while having the ball under his control, took a goal kick and hit out at crossing Deep Saha, who wanted to provoke the keeper and he reacted. The assistant referee saw and correctly made the referee aware off the infringement and a penalty was awarded. All hell broke lose on the pitch as East Bengal players and officials argued with the match officials about the decision.

Koushik Santra equalised and the now infuriated East Bengal fans first threw flares and bottles onto the ground, then bricks and stones followed and a forced break had to be taken. By then the East Bengal fans were gunning for the head of the referee for a decision which they thought incorrectly was wrong. And by now it was evident that the red and gold fans did not want the match to end and lose a mini derby at home.

The tournament organisers Zee Group were all over the place as necessary security was not in place and the enclosed Maidan grounds are too small to handle in situations of fans targeting match officials or opponent teams.

IFA secretary Utpal Ganguli said: “I feel that more security should have been provided. I had told the organisers to conduct the final at a neutral venue but they chose to go ahead with the East Bengal ground.”

And there we come to the big question. Who is at fault? Who is to blame?

I sadly have to say everyone in the chain, starting with Zee Group as tournament organisers, the IFA (West Bengal) who sanctioned the tournament, both the clubs who have to work with their fans to get some decency into them or otherwise at future matches people will die and that would be a bigger disaster for Kolkata and Indian football.

Maybe the Kolkata clubs should do it like in Germany, where clubs have fan attaches, who are some sort of social worker in the fan scene and mainly have a positive influence on how the fans support their clubs.

The fans amongst themselves also need to act preemptively to avoid such violence and abandonment’s in future.

The U-19 #ZeeBanglaFootballLeague final between @eastbengalfc & @mohunbaganac had to be abandoned with the #Mariners leading 2-1 due to crowd trouble at both ends with the #redandgold leading to the break after a penalty. Sad end to a great @zbflu19 initiative. #IndianFootball #KolkataFootball #EastBengal #MohunBagan #Maidan #Kolkata #Calcutta #football #soccer #arunfoot #India