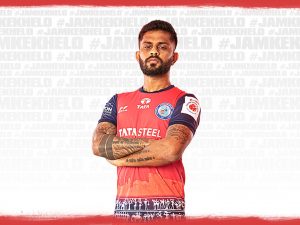 Jamshedpur FC has retained defender Karan Amin for the ISL 2021-22. Karan has been part of the Jamshedpur FC squad since the club’s inception in 2017 having represented the club across four ISL seasons and twice at the AIFF Super Cup.

The Right-Back’s retention in the squad adds depth to Jamshedpur FC’s defence line.

The Mumbai-born footballer made his debut with Jamshedpur in 2017-18 in the AIFF Super Cup. Karan has been part of the youth set-ups of I-League teams like Mumbai FC and Air India, and Second Division League for PIFA before making it as a professional player at Mumbai FC.

The defender will continue wearing no. 27 for the upcoming season of the ISL.