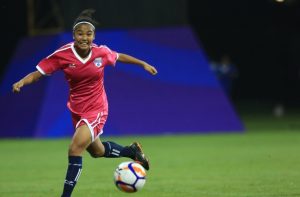 On the final day of the league phase of the FSDL-organised Hero U-17 Women’s Tournament, Lionesses ran out 4-1 winners over Tigresses to end as table-toppers while Panthers and Cheetahs split points in a 1-1 draw here on Friday.

Drishti Pant (12′) and Laxmi Mandavi (39′) scored in the first game while Lynda Kom (15′), Astam Oraon (59′), Kritina Devi (73′ own Goal), Priyangka Devi Naroem (86′) and Daisy Crasto (90+3′) scored in the second kick-off. In what was a dress-rehearsal for the final on Sunday, Lynda Kom and Oraon scored delectable goals before Estrocio came off the bench to force an own goal from Kritina. However, Priyangka’s long-ranger with Daisy’s injury-time strike sealed the deal for the Lionesses.

Earlier in the evening, Bembem Devi’s Cheetahs led for the first time in the tournament when a free kick from their own half saw the ball in Panthers’ box and Pant tapped in early as the crowd cheered on from the stands. Captain Sudha Tirkey’s delivery from a freekick was initially punched out by Vruddhi Raisinghani but with the ball not cleared, Mandavi sliced in the equaliser from handshaking distance. There were no more goals in the second half as both the teams ended with a similar goal difference but a richer experience.

The tournament has witnessed a continuous spike in the number of fans cheering on the girls. Aimed at scouting the best talents to form the U-17 team ahead of India’s participation and hosting of the 2020 FIFA U-17 Women’s World Cup, Lionesses and Tigresses face each other in the tournament final on Sunday.