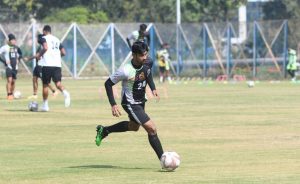 Mohammedan Sporting Club have planned no special measures to deal with Lukman Adefemi when they meet Real Kashmir FC in the ongoing I-League, according to defender Sujit Sadhu.

Two teams face each on Sunday the iconic Saltlake Stadium in a clash which is decisive for Mohammedan Sporting’s future in the I-League.

The Nigerian striker single-handedly dismantled Mohammedan Sporting by scoring a brilliant hattrick when the two teams last met in the IFA Shield semifinal in December, but Sujit is confident that his team, as a collective, can deal with the 26-year-old and says they aren’t planning especially for him.

“We are preparing for Real Kashmir and not for a player. Lukman is, of course, a very good striker and a danger to us but we also have players of great quality,” Sujit said.

“We need to focus on the duties our coach gives us, either in attacking or defending situations. We have to work together. If we are able to do this according to our plan, we can get a positive result,” he continued.

“It’s not going to be easy. But we have good energy and we have a great attitude in the camp at the moment. Obviously winning the game and making our supporters proud are our biggest priorities. We stand a great chance of getting a positive result because of the confidence we gained against Chennai City,” he added.

Sujit helped the Black Panthers secure full three points against Chennai City last week when he nodded the equalizer in the 55th minute which set the stage for Suraj Rawat to score an injury-time winner. However, the 28-year-old said team winning the game was more important to him than his goal.

“It felt good getting on the score sheet but team’s win is much more important to me. I am happy that I could contribute in the team’s cause. I am hoping that I can score more. I want to make a positive contribution towards helping the team achieve it’s target,” concluded Sujit.

The match is slated for a 2pm kick-off and it will be broadcast LIVE on 1 Sports with online streaming available on 1 Sports’ Facebook page.