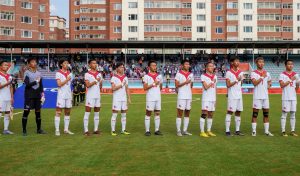 On this year’s World Environment Day, FIFA President Gianni Infantino delivered a video message launching a “Green Card for the Planet” campaign to raise awareness for the protection of the environment. In this message, the FIFA President called for wide-reaching support and action in protecting the environment and saving the future of the planet.

A little over three months on a FIFA Forward project in Mongolia has reflected that call for greater action. The Mongolian Football Federation (MFF) Football Centre – the venue for the world’s first 2022 FIFA World Cup Qatar™ qualifier – underwent an eco-friendly pitch renovation. Unlike such renovations in the past, cork was used as the refilling material for the pitch instead of rubber – all part of a contribution to help implement the FIFA President’s “Green Card for the Planet” message as MFF President Ganbaatar Amgalanbaatar pointed out.

“We are very pleased that the newly renovated field is eco-friendly,” he told FIFA.com. “This is a contribution to FIFA’s “Green Card for the Planet” campaign. We took part in this campaign by showing our green card.”

With the FIFA President’s vision of making football truly global, world’s football governing body has provided consistent support to the game’s development in countries across the world over recent years. In the case of Mongolia, an even bigger project looms at the MFF Football Centre – the installation of the all-weather airdome at the National Team Training Centre which is expected to be completed in November.

Once finished, it will provide the players with cover and protection during training throughout Mongolia’s long and often snowy winters. MFF General Secretary Terbaatar Dambiijav expressed his thanks to FIFA for its help down the years.

“We have seen FIFA as the father of the global football family,” he said. “I believe that FIFA’s support helps Mongolian Football Federation run its activities in line with FIFA and AFC. This newly built football turf pitch will bring joy and happiness to football fans.”

As a matter of fact, the MFF Football Centre holds a special place in the hearts of Mongolian fans. This was the stadium where their national team defeated Brunei Darussalam 2-0 in June 2019 for a memorable victory in what was the world’s first qualifier on the road to Qatar 2022. Despite losing 2-1 away, the Blue Wolves progressed to the next round for the first time.

The newly-renovated stadium recently had its first test as venue for 2023 AFC U-20 Asian Cup Group E qualifiers and, with that FIFA World Cup qualifying memory still fresh in mind, the nation’s youth team entered the campaign aiming to progress from a group which also featured Korea Republic, Malaysia and Sri Lanka playing as hosts. Despite failing to advance, however, the four points Mongolia earned with a 6-0 defeat of Sri Lanka and a 1-1 draw against Malaysia showcased what progress they have made.

“Our victory in the World Cup qualifying [against Brunei Darussalam] was a wonderful moment,” continued Dambiijav. “It encouraged our children to play football. Now we have a new pitch which is eco-friendly to both nature and people and I hope our fans will enjoy watching games here and our teams will gain more victories.”