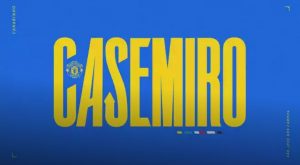 Casemiro has completed his transfer to Manchester United from Real Madrid, subject to UK visa requirements. The midfielder has signed a contract until June 2026, with the option to extend for a further year.

The Brazil international has played over 550 professional games, including 63 for his country. He has won 22 major honours in his illustrious career, including five Champions League titles and the Copa America.

Casemiro said, “The opportunity to start a new challenge at Manchester United and in the Premier League is extremely exciting.”

“I have worked with many great managers in my career and, having met with Erik and heard his ideas, I can’t wait to work closely with him, his staff and my new team-mates in the coming years.”

“I’m ending one beautiful journey in Madrid whilst starting another in Manchester as determined as ever to win football matches, win trophies and make our fans proud by bringing success to this great club.”

“Everybody knows the history of Manchester United, the significance of the club around the world and what it means to its supporters. To represent United is an honour and I am ready to give everything to help the team achieve our ambitions.”

John Murtough, Manchester United football director, said; “Casemiro is a serial winner and one of the best midfielders in world football; his exceptional record speaks for itself.”

“He compliments the skillsets of the squad and will be a great addition to the dressing room with his experience, knowledge and character.”

“I know that Casemiro remains as determined as ever to be successful on the pitch and we look forward seeing that happen in a Manchester United shirt.”