Press Release 2020-09-24 Team India Comments Off on Sahal Abdul Samad: Chhetri-bhai is the best & he wants to be the best every single day! 428 Views 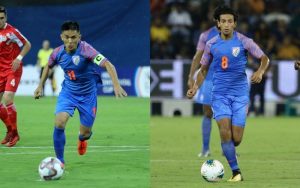 “When I got to the National camp for the first time we were walking to the ground for practice. Chhetri-bhai came to me, we walked together to the pitch, he put his hand on my shoulder and told me – ‘There’s nothing called pressure. It’s just football. Just do what you do for your club,” Sahal stated in the live chat.

“From that day I understood what kind of person he is. Afterwards, when I got selected into the final squad for the first time together, we played together and I gained more experience from him. He loves giving advice to young players all the time. That’s a really good thing about him,” Sahal mentioned.

The 23-year-old midfielder who was named the AIFF Emerging Men’s Player of the Year 2018-19 last year, took his senior team bow against Curacao in the King’s Cup 2019 and since then, he has gone on to become a key figure in the Blue Tigers midfield.

“Chhetri-bhai always sits with young players. I remember once he stopped me, Thapa (Anirudh), Amarjit (Singh Kiyam) and Kamaljit (Singh) and he gave us special advice on how to become a professional player. Nobody else had ever told me these things with such clarity,” the ‘dribble master’ informed.

“He spoke about putting hard work and practice first, and the importance of rest and nutrition. He made sure we got all of that in our mind too. I won’t forget that meeting ever, and it was really special learning from him,” Sahal added.

“The goalless draw against Qatar away from home has to be my career’s most favourite match so far. It was a really special game, especially since they were the Asian champions. Even though we missed Chhetri-bhai, he gave all the support he could. Everyone gave more than their 100% for the team. It would be the best game for me and everyone who played, I feel.”

Sahal also stressed about the brotherhood in the National team contingent and it being a “big family”.

“We’re all brothers in the camp, we’re a family. It is such a proud feeling to represent the country – wearing the jersey and it is the proudest moment. When I arrived at the camp, we were all quiet for the first day but then we got to know each other and we became a family with a special bond.”