Santosh Trophy: Punjab come from behind to beat Karnataka 2-1!

Press Release 2018-03-26 General Comments Off on Santosh Trophy: Punjab come from behind to beat Karnataka 2-1! 735 Views 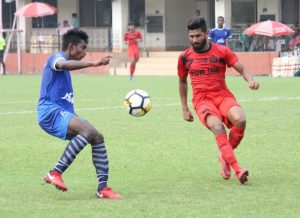 Punjab rallied from a goal down to beat Karnataka 2-1 in a Group B fixture of the ongoing 72nd Santosh Trophy played at the Sailen Manna Stadium in Howrah on Monday, March 26.

Punjab began the game in an all-out attacking mode and created the first close chance as early as the 2nd minute. Amandeep Singh did well to cut in past a couple of defenders after getting the ball from midfield but his powerful drive missed the target by a whisker.

While Punjab pressed high up, Karnataka managed to take the lead against the run of the play in the 7th minute when Rajesh converted from the spot to score his third goal in as many games. The penalty was awarded to Punjab following Sunny’s foul on Leon Augustine inside the penalty box.

Having conceded early on, Punjab started attacking with even more intensity and their efforts paid off in the 18th minute when Jitender slotted home from close after receiving a delightful ball from Gurtej Singh to get the equaliser.

Punjab then went on to take the lead in the 26th minute as Baltej scored. Parmjit Singh got the ball near the edge of the box and after getting past a couple of defenders he played the ball to an unmarked Baltej for an easy tap in.

Karnataka tried their best for an equaliser but apart from testing Moses with a header from Rajesh in the 39th minute, they were not able to create any opportunities as the first half ended 2-1.

Changing over, Karnataka looked better of the two sides but it was Punjab skipper Sarbjit Singh who remained their nemesis with his timely clearances.

Punjab also had a chance to go further up in the 59th minute but Karnataka defender Sunil Kumar made a picture perfect tackle to snatch the ball from Jitender’s feet, who had a clear look in front of goal.

Karnataka, towards the end, went all out to grab an equaliser. Although they created numerous scoring opportunities in the final quarter but it was lack of finishing that prevented them scoring as the game ended 2-1 in Punjab’s favour.

The result threw open Group B wide open as three teams will take the field on the final day of the league phase hoping to make the semifinals. Punjab and Karnataka are level on 6 points while Goa with their 6-1 win against Odisha in the other fixture of the day have 3.

Karnataka will be looking to beat Mizoram in their final league game on March 28 in order to qualify, while Punjab need to beat Goa on the same day and they will also be looking for a favour from Mizoram.