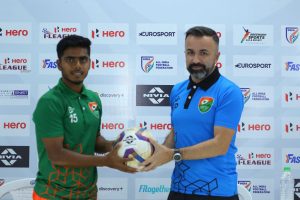 In what promises to be a fascinating encounter, Sreenidi Deccan FC face RoundGlass Punjab FC in a Matchday 12 I-League clash at the Deccan Arena in Hyderabad on Tuesday, January 17. RoundGlass Punjab currently sit atop the I-League standings while Sreenidi Deccan are second. The visitors notched a comfortable 3-0 victory over Mumbai Kenkre FC in their previous game while the hosts lost 0-1 against Rajasthan United FC.

Sreenidi Deccan FC head coach Carlos Vaz Pinto and defender Asraf Mondal addressed the media ahead of the big game. “We expect a better result than our previous game. We did not play like we usually do in the first half and although we improved in the second, it was not enough,” said Vaz Pinto. “I expect a much better performance and if we play with our usual commitment, we will get a better result too.”

The two teams have been at the top of the table since the initial stages of the I-League but Vaz Pinto downplayed the occasion. “We are not looking at the table right now. We have our own goals and we know how many points we need to achieve those goals so our focus is completely on these things. We will only look at the table at the end of the season,” he said.

Left-back Asraf Mondal has played in nine of Sreenidi Deccan FC’s 11 games this season and he is pleased with the progression the team has shown over that period. “We are a good team and have been playing well. We have conceded a few silly goals so we need to work on that,” he said. “We lost against RoundGlass Punjab in the first match of the season so we are working hard to try and get the three points this time.”

The match will kick off at 2pm IST and will be telecast live on Eurosport India, DD Sports and the Discovery+ App.