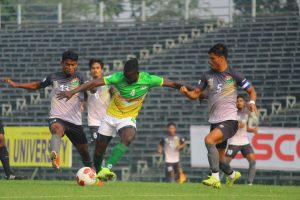 Phalguni Singh gave Sreenidhi Deccan FC an early 2nd minute lead with Railway FC equalising in the 14th minute through a Kelvin Kellie penalty. It stayed 1-1 until the 90th minute and the match headed into extra-time.

Sreenidi Deccan FC match winner Malsawmzuala was named as the man of the match.