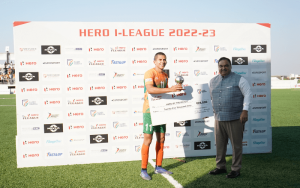 Sreenidi Deccan FC chairman Dr Taher Mahi Katikaneni is a man with a mission. The Hyderabad-based club supremo wants to bring back the glory days of the Telangana capital of the 1950s and 1960s when the city produced some of India’s all-time great players.

To achieve his target, Dr KT Mahi has raised Sreenidi Deccan FC, the leading lights of the ongoing I-League. He has also built Deccan Arena, the home turf for the club in Hyderabad and the latest state-of-the-art infrastructure on the Indian Football map. It was inaugurated by AIFF President Kalyan Chaubey on October 22, 2022, and has already witnessed a few high-intensity I-League matches.

The dazzling Deccan Arena will now conduct the upcoming U-17 Youth Cup Final Rounds matches on natural and Astro turfs. The Knockout Rounds of the competition will see 16 teams fight it out for the top prize from January 23 onwards; the Final will be held on January 31.

The Sreenidhi Group have set their sights on an out-and-out infrastructural development in the region of Andhra and Telangana, as they look to prepare for its upcoming big test.

On this occasion, AIFF Media spoke to Dr KT Mahi, who said, “It’s a wonderful initiative taken by the National Federation to organise the U-17 Youth Cup in our state. It will help football reach every corner of the city and allow our kids to access proper facilities from the very beginning.”

“We have done our best to ensure that football talents are spotted at the right age and players from this region shine on bigger platforms. We are committed to bringing football to the grassroots level of Andhra Pradesh and Telangana and helping every youngster achieve as much as their potential. Since our academy has become extremely popular, we have taken more grounds on lease and are trying to build the finest facilities for the kids,” he said.

Dr KT Mahi believes in the philosophy of promoting local talents. He thinks that youngsters must always receive their training in better facilities so that their potential can be realised in the best possible manner. “It is important to strengthen the roots, and we are doing just that.”

“There are fans who come to the stadium regularly, which is one of the main reasons we want to take the sport to the next level. While organising the U-17 Youth Cup group stage matches, the support that we received from everyone was tremendous. We sincerely hope we will have a successful tournament ahead,” Mahi said.

“We want to build a strong and dedicated football community here, and playing or experiencing games helps to inspire the young generation. I am sure with the I-League and the U-17 Youth Cup, Hyderabad will soon again be called a football hub of the country,” he added.