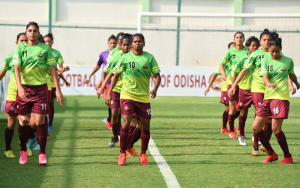 Both PIFA and SSB will eye to end their Indian Women’s League 2021-22 campaign this season with a positive note when they face each other tomorrow at the 7th Battalion Stadium.

Speaking on the upcoming fixture PIFA head coach Nirvan Shah opined, “We will enjoy the game”

He further added, “We will continue to play our style and hope to capitalize on our chances”. PIFA are currently 6th in the league table with 14 points from 10 matches.

Sharing his thoughts about the team’s debut in the league this season the gaffer said, “It has been a long season. We started last year setting our goal to participate in the IWL. It has been an incredible journey for each one of us, and the team”.

SSB head coach Juliet Miranda hopes to end their IWL campaign on a positive note. As she asserted, “Last game is also crucial for us. We require 3 points to come in 6th position. We are confident and in a positive mindset to give a good fight.”

Speaking on SSB’s season run the gaffer opined, “Through the season there were lots of ups and downs, injuries were a major concern. And bench strength has to be good which also plays a crucial role in the IWL.”

Previous Odisha Police & Hans Women FC step out to win one final time in IWL 2022!
Next Sirvodem SC determined for a positive end against ARA FC!