Press Release 2022-01-23 General, I-League, Team India Comments Off on Subhas Bhowmick was a daring man on and off the pitch, says his former proteges! 383 Views 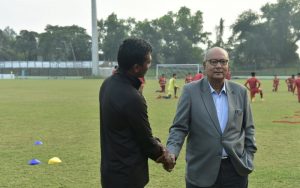 Former Blue Tigers mourned the demise of their former coach Subhas Bhowmick, who they recall, “was a daring man”, on and off the pitch.

“Subhas Bhowmick, and I share some wonderful memories. Winning the ASEAN Cup, and then I-league, and many other tournaments,” Bhaichung, the first Indian Football to play over 100 international matches, stated. “He was a very vocal man, and that led to many arguments and controversies. But I loved the man for that. He always spoke his heart out. Will miss you a lot Bhomal Da,” he added.

Bhowmick who was popularly known as ‘Bhombol da’ amongst the football fraternity, was an integral member of the India squad which won the bronze medal in the 1970 Asian Games. As a coach, he has enjoyed a highly prolific career as he coached teams to win the NFL, Hero I-League, Durand Cup and the ASEAN Cup (with East Bengal) over the years.

Another former Blue Tigers Captain IM Vijayan played under Bhowmick both in East Bengal and Mohun Bagan said, “In 1991 when I went to Mohun Bagan, he was my first coach. Later I trained under him in East Bengal too. He treated everyone like a family.”

“I try to follow his coaching philosophy till date. Apart from being a great coach, he was a great human being and I wish today’s younger generation got to train under him,” Vijayan added.

Former India captain Shanmugam Venkatesh, currently the Head Coach, Indian Arrows, mentioned about Bhowmick’s humility, which Venkatesh admits helped him immensely to grow in his role as a professional footballer.

“I got so lucky as I got the opportunity to play and train under him. In my 20 years of career, I have trained under many coaches but I have never seen such a great human being like Subhas Da,” Venkatesh said. “He used to treat me like his son, and always used to think about players. He was such a daring coach on and off the field. He is one of the successful coaches in India, and has contributed a lot to Indian Football,” Venkatesh continued.

“I am so shocked that I have no language to express the situation. We lost a great person in our Football fraternity. He was a great human being and introduced many football players to Indian Football,” Subrata opined.

“He was an exceptionally mentally tough person who loved challenges in life. My prayers for the departed soul to rest in peace. We will miss you Sir.”