The beautiful game, the City of Joy, and a much-awaited international derby!

Press Release 2019-10-13 Asia, Team India Comments Off on The beautiful game, the City of Joy, and a much-awaited international derby! 486 Views 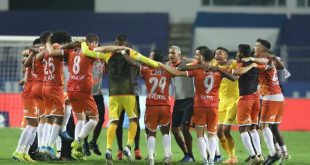 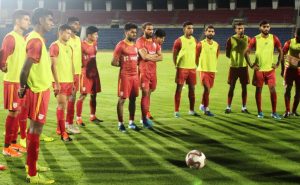 Two walls outside the dressing rooms at the Saltlake Stadium in Kolkata are enough to give one a sense of the rich history that has been witnessed inside the ramparts of the cauldron that in 1997 witnessed a record attendance of over 130,000 spectators in the 1997 Federation Cup semifinal between East Bengal and Mohun Bagan.

Diego Maradona, Lionel Messi, Oliver Kahn, Romario, Zico, Roberto Carlos, Thomas Muller, Carlos Valderrama – these are some of the greats from around the world of football to have laid foot on the hallowed turf of the stadium.

But the arena that had even hosted the FIFA U-17 World Cup Final two years back, though, however, has not experienced International football for approximately eight years. All that is now about to change, as India gets set to take on Bangladesh in the FIFA World Cup 2022 and AFC Asian Cup 2023 Joint-Qualifiers at the Saltlake Stadium on Tuesday, October 15.

Footballers who hail from the City of Joy are delighted that the National team will finally play in the arena they often refer to as the ‘Mecca of Indian Football’.

“Everyone knows that Kolkata is the Mecca of Indian football. I’ve played here at Mohun Bagan for the earlier part of my career. The fans here are just crazy,” midfielder Pronay Halder stated.

Arnab Mondal, who had operated in the heart of the Indian defence between 2013 to 2017, feels that India playing at this venue after a long time makes this a very special occasion.

“I’ve grown up playing here, in Kolkata. Football is the lifeline here. Their support provides a lot of boost to the players during a game. The players always know their fans are behind them,” said Mondal.

“The city will be hosting an international match after a really long time. This in itself, makes this game huge in the eyes of the local fans. Very few states in India can match-up to the atmosphere we get here in Kolkata,” he continued.

Pronay believes that the fact that fans travel long distances even for club games bodes well for the prospective turnout in India’s match against Bangladesh. He urged the football fans in town to get together behind the Blue Tigers, like they would, for their club teams.

“They travel from far to support the teams they love. But this time, it’s the National team that will play here. So let’s all get together and support the team. I hope that everyone comes to the ground on the day and we have packed stands,” he said.

However, the 26-year-old regrets that he was not fit enough to make the squad for the game against Bangladesh. Having suffered an injury earlier this year, Pronay has recovered sufficiently and has returned to the training ground. He is yet to be back to full fitness and is working towards it.

A BOOST FROM THE QATAR GAME

India head into the game against Bangladesh on the back of a historic 0-0 draw against AFC Asian Cup champions Qatar in their own den, something that no Asian team had been able to do against them this year.

Pronay believes that it was a team effort that helped India earn the historic result. “The team fought a lot in the away game against Qatar, and that one point that we got out of the difficult game was well-earned. It was entirely a team effort that got us that historic draw. It gave the boys that belief that we can also stand up and fight top teams,” he said.

However, the midfielder feels that all the hard work put in by the Indian team in the Qatar match will be wasted if they do not pick up the three points at home against Bangladesh.

“That gave the boys a lot of confidence and motivation, but it would mean nothing if we do not follow that up with a win against Bangladesh. That makes this match all the more important, and that is why we need all the support we can get from the fans,” he said.

That, however, is easier said than done, as Arnab Mondal believes that we could have a derby-like atmosphere on the cards on October 15.

“Since there is such geographic proximity, I believe that we will have some fans from Bangladesh in the stands, and the atmosphere could be like the Derby,” he said.

Recalling India’s last home game against Bangladesh back in 2014 in Goa, a match that ended 2-2, Arnab feels that the current National Team players are much younger and fitter, something that makes them well-equipped to deal with various situations.

“We drew that match 2-2. I think the current crop is much fitter than what the unit was, back then. They also have some young players, who are quite talented,” said Arnab.

Previous XtraTime VIDEO: Team India gets a heroes welcome in Kolkata!
Next India held by Bangladesh in SAFF U-15 Women’s Championship! 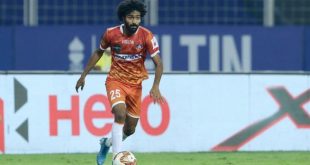 FC Goa midfielder Glan Martins, who has earned praises from all quarters in the first …