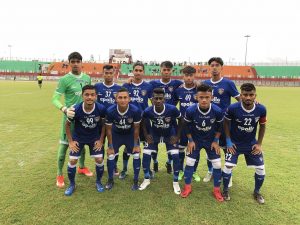 The Chennaiyin FC ‘B’ team ended their debut Second Division League campaign with a 0-4 defeat at the hands of TRAU FC at the Khuman Lampak Stadium in Imphal today. Albeit ending on a losing note, it was a campaign of learning and development for the ‘B’ team boys whose average age is a mere 18 years.

Chennaiyin FC ‘B’ made five changes to the side that lost to Bengaluru FC ‘B’ in their previous outing – Samik Mitra in place of Sayak Barai in goal, Mohammed Sarif Khan and Reamsochung ‘Remy’ Aimol replacing Charles Britto and Ajin Tom respectively in defence, and Lalliansanga Renthlei and Zonunmawia instead of Abhishek Nair and Bibin Boban respectively in midfield.

Chennaiyin FC ‘B’ began well in the heavy Imphal rain, controlling possession in the middle of the park. Remy made inroads from the left flank as captain Prosenjit Chakraborty pulled the strings in midfield. Chennaiyin strikers Aman Chetri and B. Rohmingthanga consistently found space behind the TRAU defence, allowing the likes of Prosenjit to venture forward from midfield and test the opposition backline. The skipper struck the upright with a stinging shot before narrowly missing the target on a separate occasion as Chennaiyin FC had TRAU on the ropes. Only the end product eluded the visitors.

But against the run of play, TRAU took the lead as the Chennaiyin FC defence was caught cold by a cross from the left, which Reisangmei Vashum did well to head down, the ball finding the back of the net through an onrushing Samik’s legs. Chennaiyin FC tried to hit back immediately but their finishing continued to falter as it ended 1-0 to TRAU at the break.

The Manipuri side grew into the game in the second period and began testing the Chennaiyin FC defence. Wing-backs Hendry Antonay and Remy were having a good game on the flanks as TRAU took the game to CFC by pushing higher up the pitch. Chennaiyin FC were lacking the composure from the first period as they gave the ball away in crucial areas of the pitch.

Chennaiyin FC’s resistance was eventually broken in the final ten minutes, as three quickfire goals from Soraisham Sandeep Singh, Malemnganba Meitei and Shaikhom Ronald Singh sealed it for TRAU. CFC striker Aman Chetri was given his marching orders in the closing stages after he picked up his second yellow card of the afternoon, as his side lost 4-0.

It was an unfortunate end to the Chennaiyin FC ‘B’ team’s Second Division League journey in their debut season as they finished bottom of Group C with six points from their 10 games. Chennaiyin FC’s two wins came against Langsning FC and Mohammedan Sporting Club at home as TRAU went top of the table after this win.

Despite the results, it was an enriching experience for the Chennaiyin FC ‘B’ squad which has an average age of 18 years. The experience of playing against senior professional teams from different parts of the country will aid their all-round development and help them improve and do better next season.