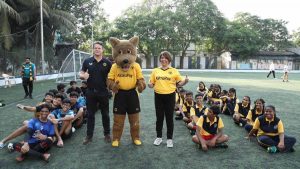 Russell Jones took Wolverhampton Wanderers to India last month to celebrate 30 years of the Premier League and deliver a series of club-driven projects across Mumbai.

Wolves’ general manager for marketing and commercial growth Jones was joined by club mascot Wolfie in Mumbai, taking part in a series of events to increase the exposure of both the Premier League and Wolves in India and make a difference to the lives of supporters there.

Together, Wolves, the Premier League and UK Government’s GREAT Britain campaign showcased the league’s impact in India and continued their support of the future development of sport in the country.

Jones and Wolfie received an incredible welcome, before getting to work on a series of events which saw Wolves attempt to use their position as a Premier League club to affect the lives of those less fortunate in India for the better.

Jones said: “It was a memorable visit. From the exciting highs of meeting Wolves supporters, to the humbling, and yet inspiring, visit to the Magic Bus Project. There are so many legacy opportunities. Huge thanks to the Premier League for inviting Wolves and for their generosity in supporting all of our different events with both the Premier League trophy and staff.”

As part of the trip, Jones led a series of club initiatives, including Wolves realigning their commitment to Podar World College, a collaborative international partner of the University of Wolverhampton and part of the Podar International School Network, boasting over 95 years of experience within the educational space.

The Podar group is now a network of 139 Podar international schools and have more than 200,000 students and 7,800 dedicated support staff and they deliver the University’s BA (Hons) business management course and the international masters in business administration course, which are accredited by the CMI.

Over the last three years Wolves have worked with the University of Wolverhampton to offer Podar students the opportunity to take part in an annual Wolves themed international project, and the first instalment of the project led to the foundation of the Mumbai Wolves, led by current chairman Nael Khan.

The November trip provided the first opportunity for students and staff to meet Jones in-person. The visit featured a guest lecture, awards ceremony, photo opportunities with the Premier League trophy and Wolfie, and a mini-tournament with funds being raised for local causes.

Jones said: “Podar is where much of our work in India has originated. The University of Wolverhampton were very pro-active in getting us involved. Students were so engaged in the first project that a theorical business studies module turned into a real-life supporter club.

“I’ve talked to the students and teachers on video calls over the last couple of years, but nothing could have prepared me for the incredible welcome I received on arrival at the college – drums, trumpets, flowers – it was special.

“I thoroughly enjoyed spending time with Dr Lulla, college staff, and the students. I had the opportunity to provide some insight into our international marketing strategy and also share my journey – from fan to GM. Hopefully it inspired one or two to work hard and fulfil their dreams.”

The trip was enhanced by the work of Mumbai Wolves, and chairman Khan, who created the supporter club in 2019 through the Podar World College International Project. The club now has over 200 members, despite being 4,556 miles from Molineux.

On the visit, Jones was able to give something back for Khan’s hard work by awarding him the Premier League Community Captain, which recognises special work in the community as part of the 30-year anniversary celebrations. To mark the award, Khan featured on the Premier League’s Fanzone show, where he shared his story.

Khan said: “My journey started in 2017 when we were promoted and finished seventh. I was really attracted by an underdog team coming back into the Premier League, so I learned so much about the history – how the club was started and how the Champions League was incepted by them. This is a great club with great history.

“It was an amazing event because we had our mascot and all the other clubs were jealous of us. We had Wolfie come down and we had some great fun with him. We played cricket with him, football with him, it was great fun.

“All the great people who have worked really hard to bring football to India, we all were awarded by the Premier League with the Community Captain. Basically, we’ve put in years and years of hard work to make football in India grow, to make people feel the love with football.”

The award helped cap a successful trip for Jones, whose visit was enriched by the welcome and presence of Khan and Mumbai Wolves, who represent the success of Worldwide Wolves perfectly.

Jones said: “It was fantastic to meet the Mumbai Wolves for the Brighton Watch Party. I’ve had lots of conversations with them over the last couple of years, so to see the passion from Nael and the 80-90 strong gathering at the watch party was a lot of fun.

“Like all good supporter clubs, the chairman is so important to how it develops, and Mumbai Wolves have one of the very best. Nael’s an absolute superstar and it was a real pleasure to meet him, but also fantastic that we could honour his hard work in India by awarding him the Premier League Community Captain.

“I really hope this will inspire Nael to develop the supporters club further and also to play a major part in our support of the Magic Bus project.”

Unfortunately, more than 30 per cent of the world’s poorest children live in India, with more than millions of children and young people facing poverty every single day of their lives.

The Magic Bus project uses sport – both playing and mentoring – as a tool to help India’s most marginalised children and young people on a path from childhood to livelihood, which is where Wolves got involved.

On the trip, Jones met a group of adolescent girls on the Magic Bus project. After a tour of their homes on BPT Ray Road, and a kick-around at their recreation ground, the girls proudly shared their inspiring stories of resilience and their aspirational dreams of working in fashion and playing football for India.

Jones said: “I was very fortunate to visit the Magic Bus project. It’s a project I’ve been aware of for a number of years via the Premier League. The poverty and underprivilege in India is startling and it was an humbling experience for me to be out there to meet a group of girls who were so inspirational in terms of their attitudes.

“They were such happy kids, they were so pleased to see us and were so welcoming. I talked to them about their hopes and dreams, and they talked to me about wanting to be models or footballers. I left thinking how I could help the kids.

“It is visits like this that remind all of us how powerful a football club can be in making a difference. Most of the great work we do through our foundation is in the local Wolverhampton area but working with Magic Bus will give us the opportunity to make a difference to the lives of people in Mumbai. Plans are in very early stages, but we sincerely hope to use the power of the partnerships we have built in Mumbai to enrich the lives of these youngsters. More to come.”