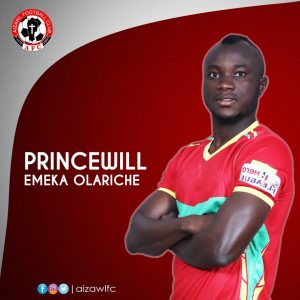 Former I-League champions Aizawl FC have announced the signing of striker Princewill Emeka Olariche from I-League rivals TRAU FC ahead of the 2020/21 season.

28 year old Owerri-born Princewill Emeka Olariche in his youth played for Ngor Okpala United and Heartland FC ‘B’ before playing for Vin Sports FC all in Nigeria.

Thereafter he moved to India to play for NEROCA FC and then for Manipuri rivals TRAU FC, whom he helped get promoted to the I-League. After a stint with Mohammedan Sporting in Kolkata, Emeka moved back to TRAU FC to play for them in the last I-League campaign.

Now Princewell Emeka leaves Manipur to move to neighbouring Mizoram and join Aizawl FC, where he hopes to continue to be successful.