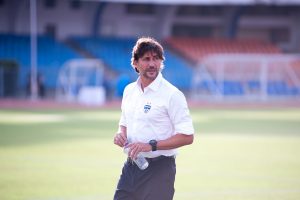 Indian Super League champions Bengaluru FC have reached an agreement with Carles Cuadrat to further the Spaniard’s stay in a new two-year deal that keeps him with the Blues till the end of the 2020-21 season.

Having taken over the reins from Albert Roca at the end of the 2017-18 season, Cuadrat – in what was his first stint as head coach of a team – led the Blues their sixth title in as many seasons when they beat FC Goa in the ISL final at the Mumbai Football Arena in March this year.

“I am delighted to continue my stay at a club that functions like a closely-knit family. I have spent three years at Bengaluru FC and the fact that I’m willing to add two more, is testament of how happy I am at the club and in the city. We achieved success last season and I would like to build on it. Importantly, we will be competing in Asia again and that’s a challenge we are all relishing. All footballing reasons aside, the love and support the fans have shown me definitely had a part to play in my decision of signing on a new deal,” said Cuadrat.

Cuadrat, who arrived at the club as Roca’s assistant in 2016, took over from his mentor last year in what was a seamless transition. And while he kept the foundations that Roca laid, intact, Cuadrat brought his own ideas to the table that the dressing room were quick to credit as the reason the Blues got across the finish line in the ISL.

Under the Spaniard, Bengaluru FC became the first team in the history of the ISL to have won the title after finishing on top of the table in the group stages. The Blues also boasted of an unbeaten record at home through the season.

Speaking on the deal, Bengaluru FC CEO Parth Jindal said, “After winning the Indian Super League last season and getting the team to perform the way it did, Carles attracted attention from a host of clubs in the country and even the continent, who wanted to secure his services. However, the fact that he has chosen to stay with Bengaluru FC is a fantastic testament to his belief in the project of this club and country, which is to put Indian football on the world map. He’s turned down lucrative deals to stay with us, and that is a very encouraging sign.”

“Given his La Masia background, he has been the perfect mentor for the young Indian players and that is an important aspect for us at Bengaluru FC. I am certain we will enjoy more success with Carles at the helm.”