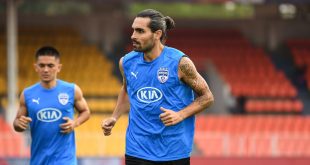 Chennaiyin FC and FC Goa will lock horns in the Indian Super League semifinal second-leg at the Fatorda Stadium on Saturday, with Chennaiyin FC holding a 4-1 advantage from the first-leg in Chennai last week.

Chennaiyin FC enter the encounter with a crucial first-leg lead and the determination to extend a club-record nine-match unbeaten run that hopefully culminates in a third ISL final on Saturday, March 14, scheduled to be held in Goa.

FC Goa, who are set to receive the League Winners Shield, and a guard of honour before kick-off from Chennaiyin FC, are buoyed by the return of lynchpin Hugo Boumous, in-form Indian midfielder Brandon Fernandes and Spaniard Edu Bedia into the mix. All three missed out in the first-leg in Chennai. As for Chennaiyin FC, there are no fresh injury concerns from that resounding victory a week prior.

It was a second-half masterclass from the two-times champions with all four of their goals coming after the break with skipper Lucian Goian, Anirudh Thapa, Eli Sabia and Lallianzuala Chhangte getting on the scoresheet as Saviour Gama scored the crucial away goal for Goa.

And with the away goals rule in place, FC Goa’s brief will be to win the tie 3-0 in regulation time in order to progress to the final. If Chennaiyin FC are to score one away goal, then the only way the match goes into extra time is if it finishes 4-1 to FC Goa in the stipulated 90 minutes. And if Chennaiyin FC score more than one away goal, it only further compounds FC Goa’s task of outscoring Chennaiyin FC on aggregate.

With six wins and two draws leading up to qualification to the semis, Chennaiyin FC garnered the most points (20) during that run-in, two more than FC Goa who notched 18 points in that period. Along with continuing their unbeaten record and making it to the final, Chennaiyin FC will also wish to avenge the 3-0 opening day defeat in Goa back in October last year.

This is also not the first time both teams are facing off in the ISL semifinals. In the 2017-18 edition which Chennaiyin FC went on to win, the semi-final first leg in Goa finished 1-1 with Thapa on the scoresheet. In the second-leg, the Marina Machans finished the job with a 3-0 scoreline (4-1 on aggregate).

Goals are pretty much a guarantee with Chennaiyin FC boasting the likes of Nerijus Valskis (13 goals, 6 assists), Rafael Crivellaro (7 goals, 7 assists), Andre Schembri (5 goals, 3 assists) and Lallianzuala Chhangte (6 goals) with only the Mizo winger netting in the first leg.

A tantalizing clash is on the cards as both the form teams in the ISL go head to head one last time in what has been a memorable campaign both sides. But only one team can progress to the final and Chennaiyin FC will be aiming to be the one.