At the Extraordinary Members Assembly of the 36 clubs in the Bundesliga and Bundesliga 2, the DFL yesterday provided information about the next steps involved in the formation of the “Taskforce Zukunft Profifussball” (Task force for the future of German professional football). There are plans to set up three working groups for this purpose, and they are due to commence operations in September.

The task force’s approach will essentially consist of reflecting on past developments, discussing matters interdisciplinary and eventually devising practical ways forward. The working groups are to comprise representatives of the clubs in the Bundesliga and Bundesliga 2, the Executive Committee of the DFL and DFL GmbH, as well as external representatives from a wide range of areas so that the relevant issues can be discussed from diverse perspectives. 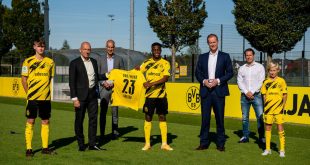