Electric Veng FC to play in their first ever MPL final! 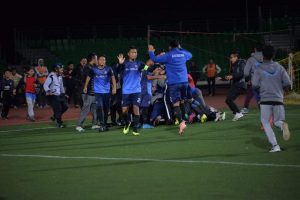 The two sides had already played out a goalless draw in the first leg and they ended the second leg on level terms again after MC Malsawmzuala equalised for Chhinga Veng FC in the second half.

Electric Veng FC goalkeeper Lalmuansanga turned into a saviour for his side as he saved two penalties in the shootout.

The sophomore MPL team had taken an early lead through Ramhlunchhunga on the fourth minute after the forward pounced on an error from the Chhinga Veng backline.

Then a moment of madness from Lalrammawia minutes before the break reduced Electric Veng FC down to 10 men as he was sent off after earning a second yellow card for reacting against Vanlalzuidika.

Chhinga Veng FC tried to take advantage of their numerical superiority but Electric Veng FC were valiantly able to hold their own for the opening period of the second half. But Chhinga Veng got their equaliser on the 73rd minute through MC Malsawmzuala.

Chhinga Veng could only muster up half chances in the end as they struggled to break down Electric Veng in the closing stages.

The match was then decided on penalties after an aggregate score of 1-1. Jacob Lalrawngbawla and Ramhlunchhunga netted their kicks for Electric Veng FC while MC Malsawmzuala scored the first for CVFC only for F. Zosangliana to miss his kick after a save from Lalmuansanga.

C. Lalnunmawia and Lalengmawia subsequently scored for Electric Veng FC with Lalsawmzela and Lalmawizuala doing the same for Chhinga Veng FC. Electric Veng’s chance to seal the win came to K. Lalmalsawma but his effort was then saved by Dharminder Guru, and Thasiama leveled the score for CVFC.

Rorelliana sealed the first kick of sudden death but Silvana R. Lalruatkima missed his to give Electric Veng FC their first ever MPL final appearance.

They will face the winner of semi final match between Aizawl FC and Chanmari FC (11th December) which Aizawl FC leads 1-0 in the first leg. The final is scheduled for December 14.