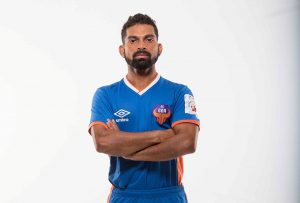 After picking up three vital points against Mumbai City FC three days ago, FC Goa returned to Fatorda’s Jawaharlal Nehru Stadium in Margao to face a resurgent Kerala Blasters FC. However, despite taking the lead, the Gaurs crashed to another 1-2 home defeat to leave them at the bottom of the Indian Super League table. There were positives from the match and perhaps the biggest one was the performance of local boy Pratesh Shirodkar at the centre of the park.

The diminutive central midfielder was a constant presence in front of the defence for FC Goa and broke up the Kerala Blasters attacks on numerous occasions. His speed and agility helped him cover ground and start a number of attacks for the home side. His wide range of passing was also on display and he linked the defence and attack well by making smart runs forward through various channels. His no nonsense approach to football helped the home side tremendously and he will want to continue with good displays in the next match against Delhi Dynamos FC.