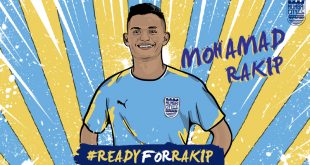 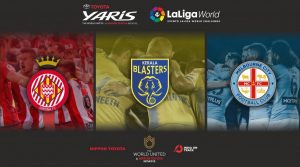 The Toyota Yaris LaLiga World has been created to showcase India as a pre-season football destination for clubs around the globe, with an aim to creating a calendar event at a grand scale. The tournament will celebrate the growing love and passion for the game in the country and provide top-notch football action to Indian fans who crave for a world–class experience.

This edition spans 3 continents and promises to be a truly international event. One of ISL’s biggest franchise, Kerala Blasters, will look to kick start their pre-season playing these top foreign clubs at home. Australian club Melbourne City FC, managed by Warren Joyce, will come in after a strong third-placed finish in the recently concluded and hotly contested A-League, the best finish by the Club in their history. LaLiga’s Girona FC will look to add Spanish flavour on their maiden trip to India. After joining the top-flight last season, Girona FC made a strong statement beating defending champions Real Madrid.

LaLiga Ambassador and Spain Football Legend, Fernando Morientes, who unveiled the tournament trophy, speaking on behalf of LaLiga said, “It gives me immense pleasure to be a part of such a historic moment. Pre-season tournaments are the best preparatory ground for a club to prepare for the season ahead. I remember how playing pre-season friendlies helped me identify the areas that I needed to work upon and be better prepared. I would like to wish all the very best to all participants and am looking forward to a closely-contested tournament.”

N. Raja, Deputy Managing Director, Toyota Kirloskar Motors expressing his delight said, “We are happy to support the Toyota Yaris LaLiga World Football Tournament along with our Dealer Partner Nippon Toyota, which has roped in the finest talents from international clubs. Toyota intends to extend its immense support to continue its initiatives to create inclusive community around the world through sport. We are happy to associate one of the most celebrated products globally with this tournament-Toyota Yaris. The excitement of the game will further add to the success of the product in the State of Kerala. Yaris resonates the same passion, commitment and excellence that drives the game of football. We hope all the clubs give their best performance and wish them every success for this season. We will continue to promote development of sports activities in the country.”

Nippon Toyota has taken an initiative called The World United with the promise to bring top-flight international football to India and across the globe. Toyota Yaris LaLiga World heralds the beginning of this visionary idea.

And the Nippon Toyota MD said, “The Toyota Yaris LaLiga World is a landmark event as this is India’s first official pre-season tournament involving top-flight international clubs. And it could not have happened at a better venue than Kochi, a city that has football in its DNA. We expect the Kerala fans to come out in large numbers in their club colours and hope they show the same affection for the touring teams too. Given the rising popularity of the sport in India, The World United is planning to make this event an annual property with more clubs participating each year and the initiative traveling to different continents.”

The CEO of India On Track, a company that is a co-promoter of the Tournament, said, “The vision behind this initiative was to host an international football event in India that could build on the excitement after the FIFA U-17 World Cup. Kerala is fast emerging as the new football capital of India and hence we feel it is the right place to host this stature of an international pre-season tournament. The aim is to showcase and share the skills, passion and knowledge about the game. We believe that Toyota Yaris LaLiga World will be a milestone in Indian Football, helping the sport grow to greater strengths.”

Varun Tripuraneni, Kerala Blasters CEO, said, “This will be a perfect start to our pre-season preparations as we play against two international clubs of great repute. It will be a treat for football fans in Kochi and we are expecting the crowd to come out in large numbers and enjoy some high quality football.”

Girona FC president Delfí Geli said, “It is an honour for our club to participate in this tournament in India. For Girona FC it will be a special experience as it will be the first time our team has played away from Europe since its foundation 88 years ago.We are looking forward to starting the tournament and showing the football that we’ve displayed in LaLiga to the Indian football fans and the world.”

Melbourne City FC CEO Scott Munn said, “We are delighted to participate in the Toyota Yaris LaLiga World. Playing against Kerala Blasters, one of the top teams in India and the LaLiga club,?Girona FC will be an exciting prospect. I believe that this will be a great preparation for our team Melbourne City FC ahead of our upcoming season.”

The tickets for the tournament will start at INR 275 and will be available through the, Official Ticketing Partner, PayTM. 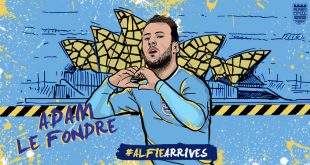