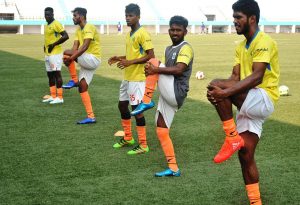 With Goa Pro League’s top of the table competition getting tougher every day the Goan Football Fans are up for a treat when Sporting Clube de Goa takes on Guardian Angel SC at the Duler Stadium in Mapusa at 4pm tomorrow. The Flaming Oranje is currently placed in third position in the table with 14 points from six matches played. While Guardian Angel SC are in sixth position with nine points from the same number of matches played. After the resounding victory against Vasco SC, Sporting Goa have had a long break before they come out to play on Tuesday.

Speaking about the importance of this match Gaffer Mateus Costa said, “This is a very important phase of the tournament; we cannot afford any slip ups here.”

He added, “We have been working hard in training and the boys have been able to produce some exceptional performances in the previous matches, we want to keep the momentum going.”

Speaking about the training Gaffer mentioned, “We have had a long break after our previous match, this has given us more time to reflect upon ourselves. The mood within the camp has been fantastic and the boys are eager to get out and play.”

Gaffer also mentioned “We are currently playing as a well oiled unit, the understanding within the team has improved and we will keep working on making it better.”