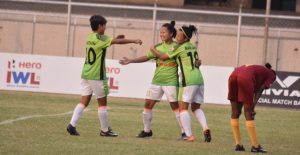 Gokulam Kerala FC posted their third win in as many games, as they demolished SSB Women Football Team by a massive 5-0 margin at the Guru Nanak Stadium in Ludhiana on Thursday, May 9.

Anju Tamang was the star of the show, as she scored a brace, and played a crucial role in the Kerala side’s build-up plays, helping them to spread the ball to the wings, essentially stretching the game in order to cause problems for the SSB defence.

Gokulam Kerala FC started the game off swiftly, as they broke the deadlock straight from the kick-off. An intricate move was finished off by India international Anju Tamang. The entire move took Gokulam Kerala FC just 14 seconds, which makes this the fastest goal scored in the 2018-19 Indian Women’s League.

SSB, however, were not ready to give up, and kept surging forward in search of the equaliser. Sangita Basfore, who generally plays midfield for the Indian Women’s Team, was the focal point of their attacks upfront.

The game ebbed and flowed both ways, but it was Gokulam, who put the doubts to bed, when Anita Rawat scored minutes before the half time break. Sanju soared up the left flank and sent in a low cross that was tapped in by Rawat.

Gokulam Kerala FC started off in almost exactly the same fashion in the second half as well, when they got the ball from SSB, registered a shot on target from Ranjana Chanu, and watched in delight as the opposition keeper Manju fumbled the ball over the goal-line.

As it that was not enough, Bawitlung Vanlalhriattiri made it four with a little over a quarter of an hour of regulation time left on the clock. The second half substitute was played through on goal, as she rounded off the keeper, sold a dummie and walked the ball into an unguarded goal.

By virtue of this win, Gokulam Kerala FC have now taken a massive lead at the top of the Group II table with nine points. They are followed by Alakhpura FC, SSB, Hans Women FC and Panjim Footballers, all of whom have just three points on the board so far.

Tamang added another goal in the second-last minute of regulation time to make it another five-goal victory for Gokulam Kerala FC.