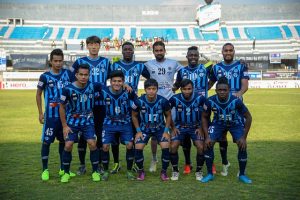 Minerva Punjab FC welcome Chennai City FC to the Guru Nanak Stadium in Ludhiana for the second leg fixture between the two debutants as I-League set to resume after the International break.

The teams had met earlier in January with Chennai City holding the Punjab side to a goalless stalemate in the opening round itself. Since then both teams have seen a plethora of changes in their personnel as well as coaching staff.

South Korean defender Sang-Min Kim has signed with the Punjab outfit to add more momentum to them.

He has to shoulder the defensive duty with Loveday Enyinnaya to give him company. In fact, Loveday and Kareem Nurain were on the scoresheet last time around as Minerva held top dogs Aizawl FC at home.
Chennai City FC, meanwhile, recorded a stunning victory against Kingfisher East Bengal to open up the title race once again just before the league went into the International break.
However, Chennai City have to deal with the absence of Nandhakumar and Prasanth due to injury, both of whom had scored in their last outing against the Red & Golds.
Marcos Tank too has not travelled with the squad to take on Minerva Punjab FC in their backyard.

Interestingly, Chennai City’s form away from home is the worst in the league as in their five away matches having lost all. To add much woes to the team management, the South Indian club have only left with four away fixtures now. Not that Minerva’s home form is anything to write home about with 1 win, 3 losses and 3 draws.