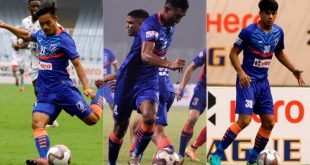 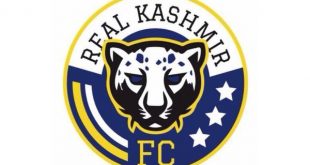 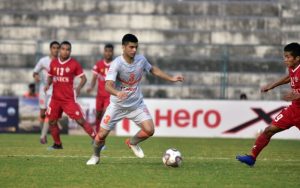 With just seconds left to play and the Indian Arrows in need of a goal to equalize, young defender Sajad Hussain Parray stepped up to the plate and rose highest in the penalty area to head home a corner kick and register his first-ever I-League goal. The strike ensured that the Arrows split points with former champions Aizawl FC on Sunday and in a chat with I-League Media, the 17-year-old from Srinagar termed the experience of playing in the league as a ‘great boon’.

“When I started playing as a young child, I always wanted to play in the I-League. However, I never even imagined that I would get this opportunity at such a young age and early stage in my career. I’m really grateful for this amazing chance,” he said.

“We are improving and growing in confidence with each match we play. For most of us, it is the first time at this level. But, with every game, we are learning so much and the whole experience is such a great boon for us. For young players our age, this is the best platform and seeing so many former Arrows players (such as Pritam Kotal, Gurpreet Singh, Amarjit Singh, etc.) go on to play for the senior national team is such a massive motivation.”

“I’m very happy and proud to be a part of this Arrows team and want to keep moving forward together in the coming games,” Sajad stated.

The defender, who was scouted and selected for the India U-15 junior national team in 2018, has been part of the AIFF Academy set-up at the Kalinga Stadium Complex in Bhubaneswar, which has been set-up in collaboration with the Government of Odisha. The same batch has now progressed to the Indian Arrows in the I-League as part of their long-term development programme with an eye on the next cycle of the AFC U-19 Championship qualifiers.

“We learned a lot and grew as individual players and as a team during our time in Odisha. The facilities were very good – from the ground, food, support staff, gym etc. The atmosphere was really healthy and great for our development. I am thankful for it,” Sajad mentioned.

He also talked about the experience gained from the various exposure tours that the team has taken part in over the last two years, saying, “My first tournament was the SAFF U-15 Championship in Nepal and then we played tournaments in UAE, South Africa, etc. Playing against strong foreign teams made us more confident and grow as a team and become mentally tougher.”

Now with the Arrows’ I-League campaign in full swing, Sajad feels that the previous exposure and the team’s bonding is helping them immensely as they make the step up to the senior level in the I-League, where they go up against a number of seasoned professionals and foreign imports.

“Compared to junior football, the level of the game in the I-League is much, much higher and requires a completely different match temperament. Playing as an all-Indian team against such high-quality players and teams is a challenge but since we have already faced so many tough and competitive teams before, it is helping us adapt to this competition,” the youngster, who dedicated his Hero of the Match award to his teammates, opined.

“Another key factor is playing as a team – it is of utmost importance. Team bonding and good communication are vital to success. Most of us who are now part of the Arrows have been together for quite some time now and we know each other well both on and off the pitch. Even the new players are gelling together well and there is a great positive atmosphere in the team. We want to keep improving and growing in the coming matches and give our best performances,” Sajad shared.

The Indian Arrows go up against Chennai City FC, another former I-League champion team, in their next game. The match is scheduled to take place on Friday, January 29 at the Kalyani Stadium at 4pm IST. 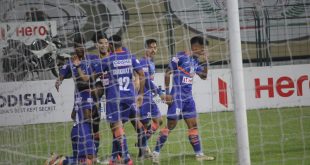