Macron & Asteras Tripolis FC to stay together until 2026! 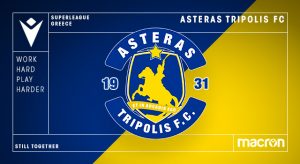 Asteras Tripolis FC and Macron have announced they have renewed their partnership agreement for another five seasons to last until 2026.

This multi-year agreement confers continuity to a project that the Italian brand and the Hellenic club have started in 2017. The season that has just begun constitutes an important objective for the Asteras Tripolis FC: the beginning of the new year, in fact, will mark the 90 year anniversary of the club’s foundation in 1931.

This current season is their 14th consecutive one in the “SuperLeague Greece”, the top championship in Greece. This is an important story that Macron, in collaboration with the Tripolis club, has always wanted to narrate through the game kits and the merchandising lines created for the yellow & blue players.