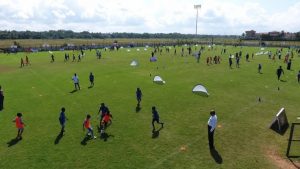 The ambitious project of the FIFA Under-17 Football World Cup, Mission XI Million, has reached the landmark of reaching out to 3,132 schools across India. The pioneering programme is set to change the future of Indian Football and the way the sport is perceived by children all around the country.

With the enthusiasm shown by the kids and the historic participation of the schools, MIXIM is well on its way to reaching out to 11 million boys and girls in all 29 states before the FIFA U-17 World Cup begins in October 2017. A mega football festival on April 8th, 2017 will give a chance to the kids of Gujarat to play at the iconic stadium, The Arena by TransStadia.

An important reason for hosting the grand Mission XI Million festival at this venue is to ensure football develops and grows in the state of Gujarat, which in recent years, has started making inroads in sports.

President AIFF and Chairman of the LOC for the FIFA U-17 World Cup India 2017, Praful Patel said, “I believe there is a lot of potential in Gujarat to become a footballing state. And while it might not be at the forefront at the moment, I will try my best to ensure that they grow in the coming years. We will start from the very base, from the kids. Through this MXIM programme, we want to establish a connect with the children here. We will follow this up with an elite academy soon and hopefully in the next couple of years, there will be a team in the I-League, the ISL as well as the Indian Women’s League from this state”.

Making this event even more special is the venue, The Arena by TransStadia, which has been given the honour to host the marquee MXIM Football Festival in its world-class FIFA Standard Football Stadium. In 2008, TransStadia set off a landmark revolution by presenting an idea to the Honourable Prime Minister Shri Narendra Modi – the dream of ‘sports for all’. The project, which covers all aspects of sports, entertainment, hospitality and talent development, was awarded under a pioneering and landmark Public Private Partnership (PPP) to the company. The stadium is home to over 12 sports including a FIFA standard football pitch, all under one roof. With globally patented technologies like the T-Box Technology, StadiArena, the Turf Protector, and a dedicated Sports Performance & Rehab Center, it enhances both fan and player experiences.

The presence of such a facility in the state of Gujarat, along with the Mission XI Million programme will help football and subsequently sports, develop in the region. Founder and Managing Director SE TransStadia, Udit Sheth elaborated on this and said, “As the country readies itself for the FIFA U-17 World Cup, all eyes are on the game of football. Over the years the sport has continued garnering an increasing number of fans in the country. Mission XI Million will also help increase viewership of the game by introducing the sport to a whole new generation of children, who may not have otherwise had the opportunity to play this sport. TransStadia is honoured to be given the opportunity to host the MXIM festival. This being our second major event, we hope to continue to bring the best of international sporting to India through our state-of-the-art facilities”.

In a journey of many firsts, this will also be the first match ever played at The Arena by TransStadia by youth icons Abhishek Bachchan, Hrithik Roshan, Bhaichung Bhutia along with the lucky kids from Mission XI Million.

Transforming the passion of football into something more concrete and have boys and girls playing the game and being active, this is a mission to connect with these kids, to change football and sports in India forever.
<p style=”text-align: right;”><i>by AIFF Media</i></p>