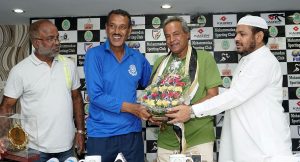 Mohammedan Sporting Club paid tribute to their most successful foreign recruit in the history of the club, Majid Baskar at a ceremony held at the Club premises on Tuesday, August 13 morning.

The Iranian icon is widely regarded as the best foreign player to ever have stepped foot on the Kolkata Maidan, played for Mohammedan Sporting from 1982 to 1987 and helped the Club to win 16 trophies which includes the Federation Cup (2), the Rovers Cup (2), the Bordoloi Trophy (2), the Independence Day Cup, the Sait Nagjee Cup, the Nizam Cup, the Airlines Gold Cup, the Peerless Cup and the Sanjay Gandhi Gold Cup.

Felicitating Baskar, Mohammedan Sporting honorary general secretary Mohammed Qamaruddin said, “We are really honoured to have Majid Baskar among us. I have no words to express the contributions which he has made towards the club, to which we are most grateful.”

Majid also sounded overwhelmed by Mohammedan Sporting’s gesture and said it was indeed a touching moment to see Subrata Bhattacharya, once his most fierce nemesis, waiting for him.

The two legends enthralled the journalists with interesting anecdotes as hordes of photographers captured the rare moment of these two being together.

Current Mohammedan Sporting coach Subrata Bhattacharya walked down memory lane to live their intense rivalry on the field and said Baskar will forever be regarded as the greatest foreign player in Kolkata football.