Mumbai City FC held by Kerala Blasters to a 1-1 draw! 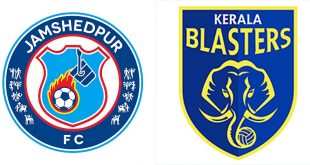 Amine Chermiti’s fourth goal of the season helped Mumbai City FC pick up a measly point against Kerala Blasters at the Mumbai Football Arena. The visitors took the lead in the 75th minute through Messi Bouli but Chermiti equalized just a couple of minutes later. This result means that the Islanders now have three draws in a row before a 10-day gap for the next game.

The encounter began with the away side dominating possession in the early stages of the game but weren’t causing any danger to the home side. Kerala Blasters were managing to keep over 60% possession with the Islanders taking time to settle in the game.

In the 19th minute, Chermiti did well to get away from Vlatko Drobarov who put in a late tackle on the Tunisian. The Kerala Blasters defender was rightly shown a yellow card for the challenge. Just a few minutes later, Raynier Fernandes got himself booked after stopping a possible counter-attack by pulling Seityasen Singh’s shirt.

The first real chance of the game came in the 26th minute through Messi Bouli. The forward showed good footwork and managed to get his acrobatic kick on target from inside the box but Amrinder made a fantastic one-handed diving save to his right to deny him. It was a special save from Amrinder who was making his 50th appearance for the Islanders.

The game slowly opened and both sides increased the tempo of the game. In the 34th minute, Rowllin Borges played a brilliant through ball to find Modou Sougou’s run down the right-wing. The Senegalese forward sent the ball across the face of the goal in an attempt to find the incoming Chermiti, but TP Rehenesh was quick to react and parried it away.

Just a couple of minutes later, Sougou was in the thick of the action again. His looping cross from the right-wing was met by Mohamed Larbi but he reacted late and couldn’t keep his effort on target. With half-time looming, Sougou had a good chance to open the scoring but his effort was a weak one and straight at TP Rehenesh in the Kerala Blasters goal. Just before the break, Borges was shown a yellow card after fouling Sergio Cidoncha. Both sides went into the break at 0-0 with plenty of work to be done.

Both sides began the second half on a pacey note, looking to take the lead. In the 51st minute, Pratik Chaudhari put in a good block to keep Messi’s shot away. The Boss Jorge Costa made an early sub Raynier being replaced by winger Bipin Singh.

Rowllin Borges came close to his first goal for the club but his long-range effort went over the goal. It was Chermiti’s long ball that put Rehenesh under pressure and the goalkeeper punched it away but it went straight to Borges who couldn’t keep his shot on target from a distance.

The Islanders were slowly finding their rhythm and momentum. Just at the hour mark, Larbi unleashed a screamer of an effort from the edge of the area but the ball narrowly flew over the crossbar. Substitute Bipin had the perfect opportunity to make an impact after coming on. Once again, Rowllin played an amazing through ball to open the Kerala Blasters defence to find Bipin’s run but Rehenesh did well to keep Bipin’s first-time shot at bay in a one-on-one situation.

The away side made their first sub as Sahal Abdul Samad was replaced by Samuel Lalmuanpuia in the 63rd minute. The game had opened up with the football playing end-to-end but without any goal involved which was the concern.

It was the visitors who drew first blood at the Arena. Jessel Carneiro’s cross from the left-wing perfectly found Messi Bouli in the box. The Cameroonian smashed the ball towards goal and found the back of the net despite Amrinder getting a hand to it. With just 15 minutes left in the game, the pressure was truly on the Islanders.

But, the never say die spirit from the Islanders got them back on level terms instantly. Sarthak Golui whipped in a cross inside the box to find Paulo Machado who headed the ball towards Amine Chermiti. The midfielder managed to get his shot on target but Rehenesh blocked it but failed to push the ball away, Chermiti was first to react and slotted the ball for his fourth goal of the campaign.

Both sides made a change each as Serge Kevyn replaced Amine Chermiti and Prasanth Karuthadathkuni coming off for Halicharan Narzary in the last 10 minutes. The encounter had a new spark with both sides pushing for the winner. The last chance of the game came Narzary’s way but his effort was a weak one and it was a simple save for Amrinder Singh.

In the end, there was nothing to separate the two sides after yet another draw for the Islanders. The points were shared as Mumbai City FC picked up their first point at home this season. Jorge Costa and his boys will be back in action on December 15 with a trip down south to face the reigning champions Bengaluru FC.