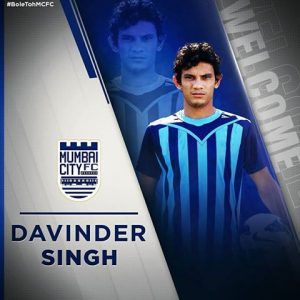 He started his youth football at the Dalbir Football Academy in Punjab before playing University football from where he was picked for the India junior teams.

Recently he was part of the India U-22s playing in the AFC U-23 Championship qualifiers in Doha, Qatar were he impressed India coach Stephen Constantine that much that he is currently training with the India senior team ahead of the Tri-Nation Football Series in Mumbai.

After his short journey in the I-League, Davinder Singh now makes the jump into the ISL to Mumbai City FC as a non-draft Indian player.