Press Release 2020-06-02 Team India Comments Off on Sandesh Jhingan: Subrata-bhai is the most workaholic footballer I’ve ever seen! 215 Views 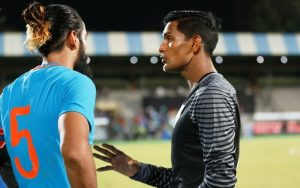 Indian National Team central defender Sandesh Jhingan lavished huge praise on ‘Spiderman’ Subrata Paul labelling him as the “most workaholic footballer” he has ever seen.

“Subrata-bhai is one of the most dedicated footballers I have ever seen. I have never seen anyone more workaholic like him. If anyone wants to know what real hard work is, one needs to spend just one day with him,” Jhingan said in a recent chat with AIFF TV.

The ‘Ironman’ shares a special camaraderie with Subrata Paul who hogged all the limelight for his astounding show during the 2011 AFC Asian Cup – Qatar. Jhingan, in an emotional note, narrated how dedicated Paul is and that’s the reason behind his performing “at the top of his form.”

“This man wakes up at 4 AM — reaches the training ground before everyone, leaves the ground late, mostly after everyone else. Even in sleep, he thinks about football. That’s why he is still performing at the top of his form. What a great man he is,” he stated.

Jhingan also divulged another interesting anecdote when Paul asked veteran defender Mahesh Gawli to bless the youngster (Jhingan) during his early days in the National Team.

“During one of our camps camp, Mahesh-paaji (Gawli) had come to meet Subrata-bhai. I was Subrata-bhai‘s room partner, and watched them from a distance. That’s when Subrata-bhai called me and asked Mahesh-paaji to put his hand on my head and bless me. Guess what, he actually did that,” Jhingan continued. “Ten years back when I was 17, I couldn’t believe all these legends mingling with me and making me feel one of them. I used to follow a notebook and note down their match results.”

Incidentally, after India finished champion in the Hero Tri-Nation Series in 2017, Sandesh was seen handing over the captain’s armband to Subrata Paul and letting him lift the trophy. It was Jhingan’s maiden captaincy endeavour before he captained the Blue Tigers once again against China in Suzhou in October 2018.

“I just couldn’t see myself having him there at the back and me lifting the trophy. It came as a random thought to me. I had asked him prior whether he would something for me. He was eager to know what. Later, when we were called up to lift the trophy, I ran to him and asked him to lift the trophy. I’m happy he accepted it. Everyone was happy, entire India was happy,” the 26-year-old defender revealed.

“It’s not about who has the armband. Subrata-bhai was a leader of the squad. He used to speak well in the meeting and motivate us. He used to marshal us from the back. He deserved it more than me.”

Another quirky moment came when Jhingan, who has been nominated for the prestigious Arjuna Award was asked to choose one between Bhaichung Bhutia, IM Vijayan and Sunil Chhetri during the interview.

“What? Do I need to choose one from them? How could I?” Jhingan was caught off-guard. “Honestly, I don’t deserve to choose one from them. Mera itni awkaad nehi hai ki jo desh ke liye itni perform kiya hai, unko judge karoon! (I don’t have the audacity to judge them who have delivered so much for the country). All of them are equally great and we always look up to them for inspiration,” fanboy Jhingan expressed.