Six U-23 players named in team India’s squad for Macau! 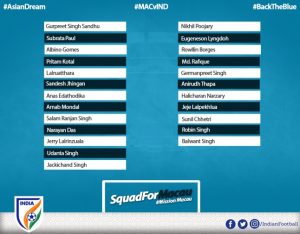 Six players from India’s AFC U-23 Championship qualifiers in Doha were named in the 24-member squad for India’s forthcoming 2019 AFC Asian Cup Qualifier match against Macau on September 5, 2017. The squad will be departing for Macau from Mumbai via Bangkok on Friday, September 1.

India currently are on top of the Group A standings with six points, courtesy back to back victories against Myanmar and the Kyrgyz Republic.

However, National Coach Stephen Constantine felt there is “no reason to underestimate Macau as a Team.”

The Team has been camping in Mumbai since August 12 during which they played two International matches against Mauritius and St. Kitts & Nevis in the Tri-Nation Football Series as part of the preparation.

“The matches provided us with the much-needed match practice ahead of our challenge against Macau,” Constantine mentioned.

Legendary Footballer I.M. Vijayan who will also be travelling to Macau as an observer said the “team looks to be in great shape.”

“The body language is positive but ahead of such matches, there’s always a tendency of taking it a bit lightly against lower ranked opponents. The boys need to keep working hard on the ground against Macau,” he stated.