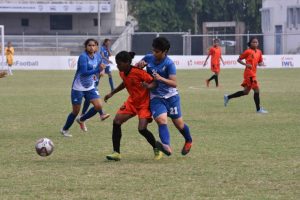 SSB Women FC notched up a comfortable win over Hans Women FC by a 2-0 margin at the Guru Nanak Stadium in Ludhiana on Friday, to secure themselves a spot in the 2018-19 Indian Women’s League semifinals.

Anibala Devi, who put SSB in the lead in the first half, was the star of the show, before Sandhya Kachhap added a second minutes before the final whistle.

It was a tight contest in the middle of the park, but SSB edged the midfield battles and created more chances.

The side from Bengal even managed to rattle the crossbar courtesy a shot from midfielder Sangita Basfore.

SSB managed to take get the lead on the half-hour mark, when they launched a swift counter-attack that saw a cross from the left being beautifully converted to a goal by an air-borne Anibala Devi, who tapped her volley past the keeper.

That goal gave more confidence to SSB, and they started to gain more control as midfielders Basfore and Anibala started to grow into the game.

The Siliguri-based side came out with more vigour after the change of ends, as Basfore and Anibala dominated the ball from the middle of the park.

They launched a flurry of attacks that put the Hans defence under a lot of pressure. Sumila Chanu soared up the SSB left wing and centred it a few minutes after the restart. Dular Marandi, who was inside the area, scuffed her header, but got a second chance, which she put wide with a left-footer.

The midfield duo of Sangita Basfore and Anibala Devi combined again as the former laid it off for latter whose shot was saved by Hans keeper Ketaki Mangala Devi.

As the game progressed, SSB, who needed just a draw to book their spot in the semifinals, were content on keeping possession of the ball, not allowing the opposition to create opportunities.

With about five minutes of regulation time left on the clock, Hans employed an interesting set-piece tactic, as they sent their goalkeeper Tyagi forward to attack the ball. However, it was cleared after a melee inside the SSB box and she had to return to her post eventually.

Right at the end of regulation time, Hans gave away a cheap free-kick near their box as they picked up the ball, thinking it to be a throw-in. However, the whole of the ball had not crossed the whole of the line, and the referee awarded a free-kick to SSB.

The ensuing free-kick dropped inside the Hans six-yard area, before it was side-footed into the net by Sandhya Kachhap, to secure the win for the Bengal side.