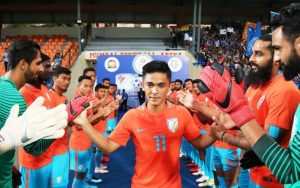 June 4, 2018 will remain etched in the memory of Indian football fans forever. It was on this day that talismanic Sunil Chhetri played his 100th International match – only the second Indian Footballer to do so. And he made it even more memorable with a double strike in a 3-0 victory over mighty Kenya.

While a full house clad in Blue braved the incessant rain to reach the Mumbai Football Arena hours before the kick-off, the rest of the country remained glued to their television sets to witness the history — #Chhetri100.

“We try to keep ourselves unfazed before any game. But it was a little different on that particular occasion. We were on a high after our victory against Chinese Taipei and Sunil-bhai’s emotional message played the role of a perfect catalyst,” Gurpreet Singh Sandhu recollected. “The stage was set for a blockbuster.”

Sandesh Jhingan, normally prefers to stay calm before a game. But the madness amongst the football-loving crowd simply left him wide-eyed even before the kick-off.

“Generally, I always try to stay calm before a match no matter how big the game is. But Sunil-bhai’s message weaved magic amongst the fans and the craze for tickets in Mumbai was unheard of. It seemed the entire Mumbai city thronged the stadium that day,” Jhingan stated.

“Sunil-bhai’s message, the rain and fans turning up to the stadium – all combined to make it an unbelievable scene. To play in front of such a vocal crowd where your every move is being cheered at was a huge experience,” he added.

The Blue Tigers came up with another gesture before they hit the pitch for the warm-up. It was a ‘small tribute to highlight his glories over the years’ – a guard of honour for the maestro.

“He fully deserved it,” Jhingan stated. “What he did for the nation for 10-15 years can’t be justified by the guard of honour. He will always be remembered by his achievements and contributions to Indian Football over the years. He’s someone who has firmly booked his place in the history book. This gesture was a small tribute to highlight his glories over the years. Of course, it was a great feeling to be part of it.”

On the ground, however, the sturdy Kenyan defenders were tough to crack. Finally, after the clock crossed the hour-mark, Chhetri outwitted the Kenyan goalkeeper to find the back of the net and the stadium erupted in joy. The floodgates opened – Jeje Lalpekhlua joined the party three minutes later.

But the best was still to unfold – the mischievous chip in the dying minutes from Chhetri and a perfect wrap up with all three points which paved their way to the final.

“The fantastic goals, especially the dink one truly showed how cool he is in front of the goal. Even we left the ground with a clean sheet too which showed how clinical we were at the rear as well. Kenya were extremely tough opponents with deadly speed, strength and combined force – just like any other African team,” Jhingan continued.

But the day will not just be remembered for the match and exploits on the field. Rather it will be remembered for a nation answering to the call of their captain – from Virat Kohli to Ranveer Singh to Amitabh Bachchan to Sachin Tendulkar and so many.

Will you ever get tired of watching this @chetrisunil11 stunner over and over again? 🤩