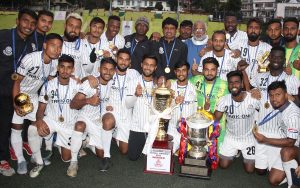 Mohammedan Sporting Club defeated Sikkim Himalayan FC 2-1 to claim the title in the 39th Sikkim Governor’s Gold Cup at the Paljor Stadium in Gangtok on Tuesday.

Vanlalbiaa Chhangte (4th, 79th), who adjudged as the player of the tournament, scored twice after Sikkim Himalayan FC equalized through Eugene Nimako (62nd).

The Black Panthers looked dangerous from the outset and took the lead as early as the 4th minute through Vanlalbiaa, who rounded Sikkim Himalayan FC goalkeeper Urgen Pintson to slot from close range.

Encouraged by their start, the Black Panthers piled on the pressure only to be denied by Urgen, who produced a string of brilliant saves to keep his side in the match.

That’s not to say Sikkim Himalayan FC didn’t have their chances. There were several occasions when they broke past the Mohammedan Sporting back-line and threatened 1v1 with Mohammedan SC goalkeeper Priyant Singh, however were failed to be as lethal as they needed to be in front of goal.

Mohammedan Sporting though continued to dominate the proceedings, but poor decision-making let them down in the final third which saw Dipendu Biswas’ charges went into the breather with only a solitary goal lead.

Sikkim Himalayan FC came out of the sheds fired up to bring themselves back into contention, controlling the ball, winning set pieces and keeping Mohammedan Sporting pinned into their own back third and their efforts were soon rewarded in the 62nd minute when a chipped ball headed into the path of Eugene who ran onto it and smacked it hard at goal. Priyant failed to put in a clean save and the ball trickled past the goal line.

Nonetheless, Mohammedan Sporting continued to have the majority of possession and chances in front of goal with Tirthankar Sarkar combining well with Vanlalbiaa and Charles Atcha to create opportunities they were often unlucky not to score from.

Sikkim Himalayan FC defense looked comfortable in absorbing Mohammedan SC’s attacking pressure, while looking to catch their opponents off-guard as it appeared like the local side were trying take the game to the penalties.

With time running out and the game heading towards penalties, Mohammedan Sporting reclaimed their lead in the 79th minute when Vanlalbiaa find the net with a powerful drive at the end of a determined run and cross from the left.

The match started to become a little tenser as the clock counted down with Sikkim Himalayan FC showing great determination in their pursuit of an equalizer, while Mohammedan Sporting players tried to kill the game’s rhythm and they did what they needed to secure third Sikkim Governor’s Gold Cup title.