Home / Indian Football / Indian Super League / Youngsters to get a look in as Bengaluru FC take on ATK!

Youngsters to get a look in as Bengaluru FC take on ATK!

Press Release 2020-02-21 Indian Super League Comments Off on Youngsters to get a look in as Bengaluru FC take on ATK! 197 Views 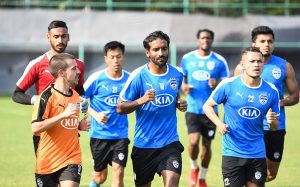 With his side having booked a place in the playoff stages of the Indian Super League and the prospect of three very big games looming large, Bengaluru FC head coach Carles Cuadrat said that he will be fielding a heavily rotated squad comprising youngsters when Bengaluru FC take on ATK FC at the Sree Kanteerava Stadium on Saturday.

“I want to use this opportunity to give some of the younger players a chance to play a big match because they have been working hard throughout the season. This is an experience they will relish. ATK have a lot of good players in their team and many who can change the course of a game by themselves. I don’t know how they are planning to approach this game, but we will be giving chances to players who have been helping us through the season,” Cuadrat said.

“Also, we are factoring the three ‘finals’ we will be playing over the next two weeks. The first one is on the 26th of February in the AFC Cup against Maziya, and the next are the two legs of the ISL semifinal. In comparison to those challenges, Saturday’s game is not as consequential. Of course, I want to win every game I play, but we have to be smart in managing these situations,” added Cuadrat.

Earlier this season, a David Williams strike settled the tie as Bengaluru FC went down 0-1 to ATK at the Saltlake Stadium in Kolkata. But Cuadrat maintained that with little at stake, victory against the Antonio Habas-coached was not the main motive.

“I remember last season we only won one game in the last six before being crowned champions. We did our homework and reached the semifinal with our players well rested and ready. This phase of the League helps us relax a little and prepare for the big games. I am sure that the fans will come in numbers to support the team, and with so many young players you can never guess the result. But the important moments of the season are yet to come,” Cuadrat added.

Bengaluru FC, currently on 29 points from 17 games, have secured qualification to the final four where a clash against one of ATK or FC Goa awaits them. With the possibility of facing Habas’ men twice more this season, tomorrow’s clash could serve as a dress-rehearsal of sorts.

The match kicks off at 7.30pm and will be telecast live on the STAR Sports network and on Hotstar.