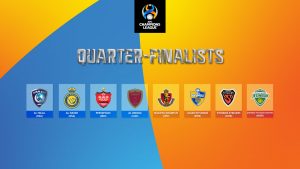 The cast for the 2021 AFC Champions League quarterfinals has been confirmed following the final two Round of 16 matches on Wednesday.

The eight teams will know their quarterfinal opponents in Friday’s draw at 15:00 (UTC+8) in Kuala Lumpur, Malaysia.

Pohang defeated Japan’s Cerezo Osaka 1-0 on Wednesday, while Jeonbuk saw off the challenge of BG Pathum United through a 4-2 penalty shootout win after the match ended 1-1 after extra-time.

Ulsan Hyundai, seeking to lift the AFC Champions League trophy for a third time, defeated Japan’s Kawasaki Frontale 3-2 on penalties after their Round of 16 tie ended 0-0 after extra time on Tuesday

Nagoya Grampus impressed in their win over South Korea’s Daegu FC as a hattrick from Jakub Swierczok saw them come from behind twice to walk away with a 4-2 score.

Saudi Arabia’s Al Hilal SFC, the 2019 champions, were the first team from the West to book their quarter-final ticket with a 2-0 win over Iran’s Esteghlal FC on Monday.

Joining them in the last eight were fellow Saudi Pro League side Al Nassr, who edged Iran’s Tractor FC 1-0 on Tuesday.

Al Wahda FSCC also advanced after a hard-fought 5-4 win on penalties against fellow UAE Pro League side Sharjah FC, with the tie ending 1-1 after extra time.

Persepolis FC, runners-up in 2018 and 2020, impressed in a 1-0 win over debutants FC Istiklol of Tajikistan with the Iran champions overcoming partisan support to advance.